One of the components of evolutionary expansion is the ability to allow base beliefs to expand beyond the primitive definitions which you have been groomed to hold onto with every fiber of your being. Even so, with all that familial and social programming, something inside you is gently tapping on your shoulder, quietly whispering the question, “Is there something more?” Indeed, there is. Here are 7 points of evolving expansion that you may notice as contrasting as you continue to open, grow and change into the higher version of yourself. 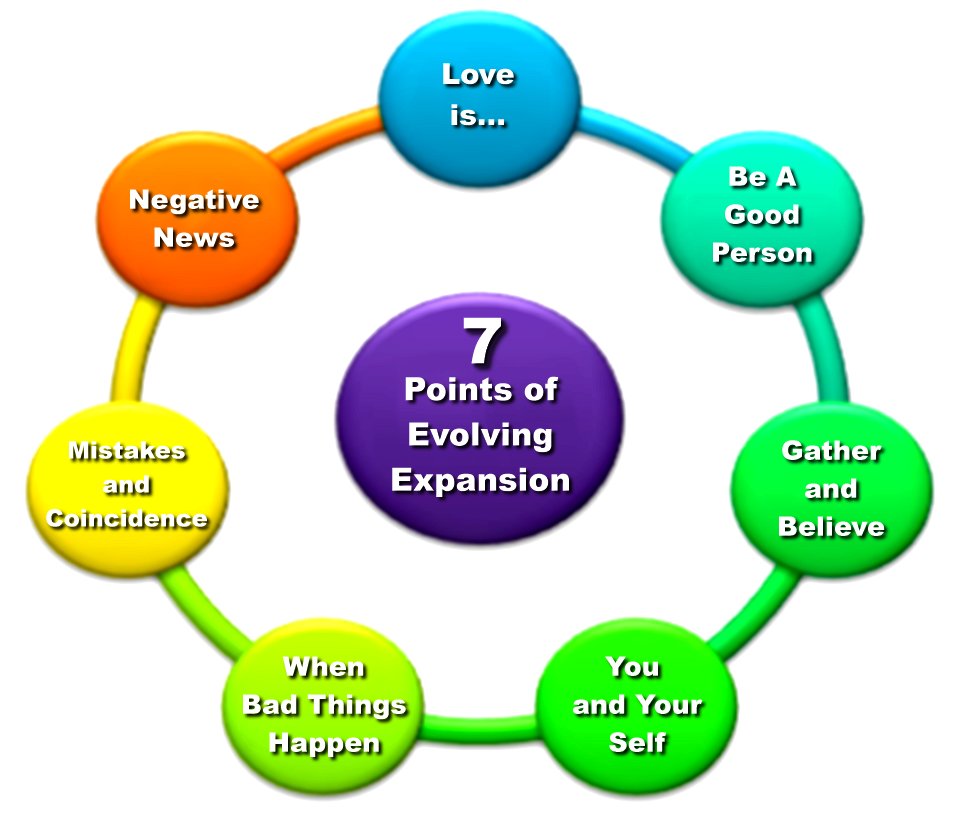 We’re all told to be a good person, to not try to buck the system or be a rebel. There is a basic tenant which harkens to us to not be a bad person, to treat our fellow beings as we might like to have them treat us and to feel sorry for others who are struggling (maybe even lend them a hand in one way or another). Avoid criminal activity, obey the laws of the land, understand and reinforce the ideals of what is right and what is wrong, and influence others to comply.

Evolving to the grander version of yourself includes allowing the good person that you’ve been raised to be to expand into an even better person, only this next level of goodness is not defined by others. The good person you’re becoming can only be defined by you, as the result of your expanding self, establishing a greater, more sensitive heart connection with the energies of life. This expanded good person is likely to see things quite differently than their other well-programmed and compliant neighbors. Still, the inclination to be a good person remains, though it takes on a new vitality and flavor than what others might definitively expect.

In the United States and other countries, this is usually an expectation to have an inclination to some kind of belief system. While some are more popular than others, there is a wide range of belief systems available for anyone to adhere to, everything from Catholicism to Atheism and then some.

The expanded being begins to break free from the confines of any box which adheres to a specific and limited belief system. As you evolve you see that things are not as they appear to be and certainly not as you were led to believe. This opens the heart and the mind to new possibilities. While you may have a desire to continue with your present belief system, if you were to clearly voice your new revelations, or question the inappropriateness or inadequacies with their prescribed belief system, this could cause problems for you. You are developing your own belief system, which cannot be fit into someone else’s restrictive box of thought.

3. You and Your Self

You’ve been raised to believe that you must fight to preserve your sense of self. You know what you feel, want, believe and you are compelled to fight, or risk all to defend it. This is an egocentric point of view which keeps all of us separated from becoming one. Even in the sacred bond of marriage, or among blood relatives, this “fight for your right” mentality is pervasive, keeps and tears us apart. We form organizations, factions, religions, governments, laws and military forces to defend our separateness.

As you evolve into the higher version of your self, your “self” decreases as you become more tolerant and tune into the vibration of love and independently connect more to the source of everything. As you bid your ego, Adieu, you can understand what Jesus meant when he said, “He who has found his life will lose it, and he who has lost his life for My sake will find it.” (Matthew 16:25) It doesn’t refer to your literal loss of life, but to your moving forward for the greater good, leaving your ego behind; not an easy thing to do. Your ego has been in the driver’s seat far too long to be willing to leave without a fight. Nonetheless, letting go of this part of your self is and welcomed and important part of your evolution.

The old you was programmed to get up and fight or sulk in sadness when things don’t go the way you want, always having to choose between accepting victimization or becoming the warrior willing to fight (compromise morals or commit crimes) for what you want, when things don’t go the way you expected. Ultimately, the powers that be are too powerful to do battle with, so most of us, sulk, fall into depression, or try to ease the pain by leaning on a wide variety of addictions which avail themselves to help us mitigate the damages and pain associated with having to accept our lowly lot in life.

Your expanded-self looks at challenges, difficulties, inadequacies and incongruent ideas from an entirely new perspective. From this viewpoint above and outside yourself, without your ego in tow, you are more able to see things as they really are, not as you’ve been programmed to see them. You are understanding more that when Jesus said, “And we know that in all things God works for the good…” (Romans 8:28) that they truly do. “All things,” even the worst of things you could possibly imagine, all pave the way for something so far better, but we are more likely than not unable to see what good lays beyond the struggle we may be engaged in at the time. With this understanding, you are less prone to worry, and unable to be victimized, because you know there is something better not far off, eliminating what we previously considered, “bad things.” Now you’re realizing that these are only necessary changes of direction or attention.

You have been trained to believe that mistakes are bad, and you’ve learned to beat yourself up for your missteps and accept ridicule from others when you’ve stumbled. And coincidences, are just that; some unassociated or random thing that has transpired for no apparent reason, which could be a fortunate unexpected good thing (or a bad thing). In any case, these things, your unfortunate missteps and any coincidental manifestations are just that; random and disconnected. Sometimes stuff just happens; that is all.

As you continue to evolve you begin to understand that there are no such things as mistakes or coincidence because you are becoming more aware of the divine connectedness in all things. You know that all mistakes carry with them a sacred treasure of a hidden message or learning that you may not have been able to receive having not gone through this process leading to your growth and attainment of more wisdom. This gives you a unique perspective and knowledge that is priceless to anyone who might be struggling with a similar set of circumstances. Then there are the coincidences, of course, you realize that these are divine gifts and blessings (or corrections) that all serve as blessed rewards or ways to put you back on the path to your highest and best.

We are programmed to keep one ear and one eye (if not both of them) leaning on the newsfeed spoon-fed to us by the media, books, films, “reality shows” news coverage, and “live feeds” via the Internet. This exposure to mass media is the main source of disseminating your programming, in addition to and following your public or private schooling, to assure that you become a good citizen, amiable to the control of the powers-that-be which are charged with your control. Their favorite tool for delivering messages and thought patterns that run deep is to strongly associate them and deliver them in a state of fear or danger. Then we become unpaid foot soldiers, spreading the message and monitoring our neighbors by doing the responsible thing with the innocuous, “Did you hear in the news…?”

As you grow and learn more about how things are not as they are, or how they were presented to you, you develop a sort of Spidey-sense when you’re being exposed to the propaganda and lie(s) promoted by the powers that be, in an effort to distract you from your growth and expansion. The most effective tool used to manipulate you and the masses is fear, and they will use it, exploit and spin anything and everything they can to keep you in a fear-based vibration, because you and everyone else is so much easier to control when you’re in a state of fear and are more likely to believe that you need someone else to keep you safe from the things that you are unable to witness first-hand. The more evolved you become, the less interested you are in propaganda and lies.

When you think of love, you’ve been programmed to have certain ideologies associated with love; and this is perfect for the masses. It goes something, like this, the different kinds of love include love for your family and friends, love for fauna and flora, love for your pet, love of one’s country, love for persons, places, and things, and romantic love between two people “in love.” Love initiates within you, your heart, for someone or something outside of yourself.

Love is the carrier wave of all energy, it is in everything, throughout all that is or ever was, holds all things together and provides appropriate separation, exists in the absence of anything amidst any void, has no beginning and no end. Even in negative energy, love is there. As you expand you learn to tap into this limitless energy from outside yourself, allow it to envelop all that you are, letting it consume you and flow out to others. You now know that love is not limited to individuals, and your love for individuals changes, as you move away from selfish love to the unconditional forms of love and its expression. Additionally, as you learn how to harness its power, you can learn how to use it to share, heal and be the light to an otherwise dark and thirsty world that longs for the release of this powerful energetic influence.

These are just some of the areas you will notice major shifts of consciousness when you expand and continue to evolve into the highest and best version of yourself.