We are, all of us, ingredients of the human soup. There’s no formal step-by-step recipe, we’re just all lumped together into the boiling pot of life. How do you like that? 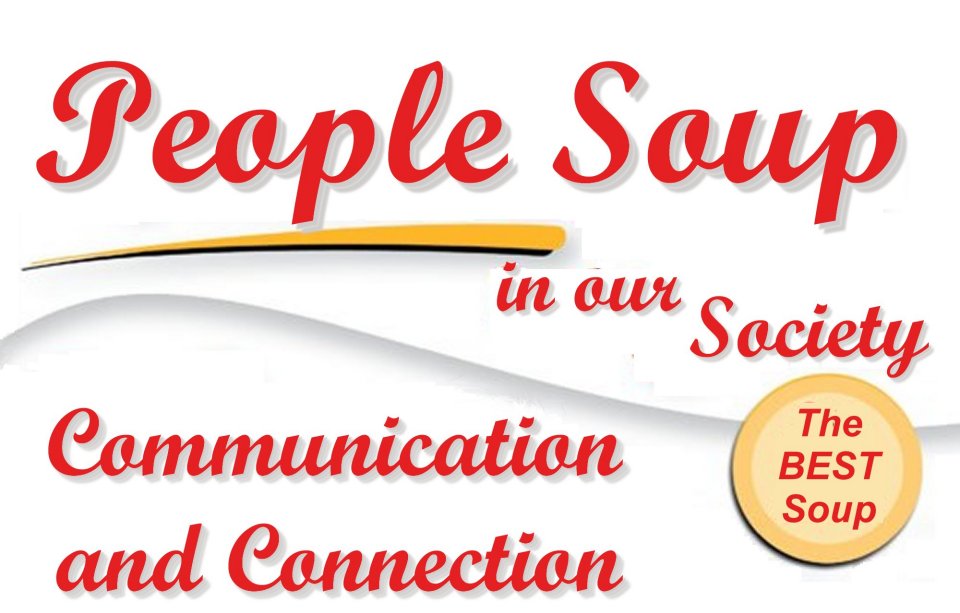 If we’re all going to be in this soup together, don’t you think we should find ways to interact with each other while we’re in the soup together?

No matter what kind of soup you’re in, your ability to effectively communicate with the other ingredients in the soup can lead to the creation of the best tasting and satisfying soup experience.

To better communicate with people, try not being rude. If you’re in the habit of interrupting or finishing sentences for someone, try letting them finish their own sentences. When you cut them off, they may be reluctant to re-engage and you may lose creating a connection with this person. Let your conversation be inviting and encouraging the other person to expound on their thoughts and reach even deeper in their relation to you. Not cutting off someone mid-sentence or thought, invites them to be more open, creating an environment for greater connection.

While you’re not interrupting, you might consider really making the effort to listen intently to what they’re saying and indicating you are listening by not only acknowledging you are listening, to verify by feeding what they are saying back to them. When you’re actively listening in this manner, you are less inclined to be thinking more about what you will say next. When you’re not actively listening, you may only be picking up key words and phrases and planning your response. Not listening intently could have you missing something of importance.

Don’t let your thoughts drift off or otherwise disconnect from the conversation. Even if you disagree with what the other person is saying, let them say their piece. Don’t take a defensive position and let them know you have respect for their point of view.

Try to keep your feet firmly planted on the ground by resisting the temptation of exaggerating opinions, circumstances of facts in an attempt to gain control or superiority when engaged in a difficult conversation. Don’t use exclusive hyperbole such as, “You never,” or, “You always.” Rarely, if ever, are these exaggerated claims ever true.

Seeking to affix blame onto someone else, only distracts from the ability to resolve or come to a logical conclusion in any circumstance, while setting the base tone of that conversation in a negative vibration from that point forward. You can only change or affect anything that you take responsibility for.

When you are conversing and potentially creating a connection with someone resist the temptation to reach into the past bringing up and breathing life into otherwise dead issues. Try to keep your conversation current, in the present tense. Anchoring people in the past is far from the integrous intention of focusing on the now. Often the past casts a haze on the clarity of what is transpiring today.

No one’s position has ever been converted by debate. So avoid this type of adversarial conversation at all costs. All debating does is to bolster and further solidify the other person’s position while promoting separation. Keeping the conversation open, honest and permeable fosters an environment where people are willing to let down their guards, and allow the conversation to reach a deeper level of connection. In this state, people are more vulnerable and may be more open to new ideas, or even question dogma.

Surrender any inclination you might have to win in any conversation. Always be open to the idea that your desire is to arrive at a mutually beneficial resolution without causing emotional distress. Honor what the other person has to say. Let your conversation be fueled by love and mutual respect, not the need to dominate the verbal exchange or to be the winner (which implies that the person you’re talking to is the loser).

In the event that things are getting emotionally charged, tense or heated, take a break. A brief time out can be appropriate and allow each of you to re-center yourselves. You don’t necessarily have to break exposure to each other completely (like leaving the room or taking a walk) as this might look like abandonment. Instead, think about offering to change the subject completely to something you both can enjoy taking about while agreeing to resume the difficult conversation following the brief recess. Approaching a difficult conversation after a break can help to let parties think more freely and openly when their emotions aren’t overriding their ability to effectively communicate or connect.

If you have differing points of view, honor the other person’s point of view. Think about it; don’t you want the other person to honor and respect your point of view? Of course, you do. So, doesn’t it just make so much sense to treat the person with whom you are trying to conversate or connect with the same respect? It’s up to you to set the proper environment of respect and potential connection. Certainly, you need to be able to express your opinion or offer you unique perspective or share your concerns, but do so motivated by love, not aggression.

I am regularly remembering the advice of Steven Covey, to “Always seek win-win,” (habit #4 of the 7 Habits of Highly Effective People) in any conversation. By applying these methods of effectively communicating and connecting via earnest conversation, everyone wins, no matter what soup you’re in.