Believing in angels does not have any bearing on the kind of person you are; it doesn’t reflect whether you are a good person, bad person, religious/spiritual or not.

What’s interesting to me, as I meet men and women across many years of life, there are moments when people who would have never given a moment of thought about angels begin to question if, or believe that, angels are everywhere. 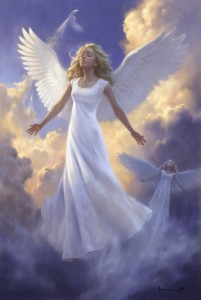 In a society whose faith is dwindling, angels still represent hope, resonating with individuals whose faith has waned, or express no faith whatsoever.

While educated atheists contend that belief in angels is part of the dumbing down of the United States, nonetheless 77% of Americans, including believers of all religions and those who refuse to have any religious belief at all, believe that angels are real. Yes, even some atheists believe in angels.

You can believe – or not – it matters not to them. They are there, watching everything in life, gently nudging us to the left or right, whispering marvelous things inside our heads, protecting, guiding us and allowing us to make our own way (and our own mistakes) along the way. And, yes, they are with us when it is our time to exit this life.

Angels are not religious. Man is religious. Religion is man’s way of trying to conceive of the creator and have some understanding or connection with the creator. Religions may come and go, change and grow, yet angels are – as they have always been – never changing.

Do I have a guardian angel?

My personal belief is, “Yes,” you do have a guardian angel – but this is a matter for you to investigate for yourself – I would never persuade you to believe one way or the other. Since I have a religious background and some angelic work in my history, I am pre-disposed to certain ideas about angels and how we can interact with them, but everyone is different; just as every angel is also different.

Most people who once had no belief in angels begin to believe following an inexplicable angelic experience.

It’s not like the angels are clamoring for acknowledgement; they could care less what we think about them. Still, in that moment – when human stares into the eyes of an angel, face-to-face (figuratively) – it suddenly becomes clear: Angels do exist.

You believe in angels. That statement will apply to 8 out of every 10 people who read these words.

There are sound reasons why you believe, it may be religious persuasion, blind faith or in many cases you believe because of your experience and you know that you know that angels are among us.

Regardless of your belief in anything (or nothing) there are undoubtedly unseen energetic forces all around us in other dimensions that appear to display intelligence and have the ability to influence life, as we know it. For the moment, let’s suspend disbelief and refer to these energies as angels.

Why do you believe in angels?

2 thoughts on “Do You Believe in Angels?”