We all know that things are not always as they appear, yet widely we still tend to base our opinion of another person based on a very small data sample. As much as we know that we don’t like people to judge us, reduce us to a structured personality profile, assume that we are a particular kind of cat or two-dimensional caricatures; still we tend to do this when exposed to another individual whom we might not know very well.

Our first impression of someone will influence and spin everything they say or do from that point forward to support our initial opinion or generalization of the kind of person this person may (or may not) be. 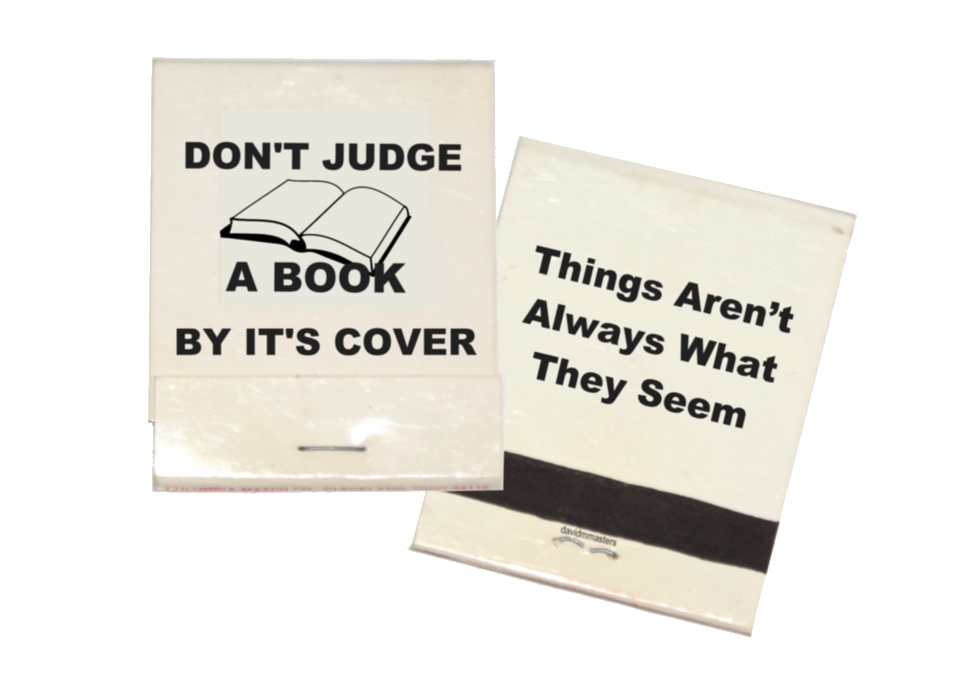 In business, some of the best talent to support your organization comes from the least likely candidates. Often someone who does not interview well may bring the most significant impact to your organization. They might not look the part, dress fashionably or have the best social skills but what they bring to the table can far supersede your more trendy hires or associates.

Of course, we don’t just tend to judge people by their appearance in the sifting and sorting of the hiring process, we judge people based on our own impression of them in all areas of life.

There is the homeless person holding the “Will Work for Food” sign, we don’t think twice before making an immediate evaluation of this person, even though we do not have a clue who they are, what their position in life is, whether they are genuinely broke or not.

When we’re on the prowl for a potential mate, book covers enter the game again. This one’s not handsome/pretty enough, not tall enough, too short, bad taste in fragrance, shoes or jewelry. Then, of course, there’s the number one book cover, “What kind of car does he drive?”

Especially if we’ve been around the relationship venue for some time, we have a whole list of items to disqualify any potential suitor who might come our way, based on our own personal bias and experience.

In a supermarket, you could hear someone in line repeat a particular phrase that sets off all kinds of bells and whistles and you immediately jump to a conclusion about what kind of person this is based on a string of seven or eight words that triggered your psyches.

If you’re on the lookout for demons, you’re likely to find them everywhere you look.

It appears the most judgmental people of all can be found trolling the Internet looking for people to insult, degrade and humiliate.

I know someone who poured their heart out on Facebook (alright, inadvisable, nonetheless) this person was waylaid by an onslaught of vile accusations and ridicule. All from one transparent, honest and open statement, let loose for the world to see; only to be made the subject of further abuse.

In the event that you get hammered by one of these haters, please try not to take it personal. They don’t know you, and they know no other way to make themselves feel better, than to put someone else down. It’s not about you, it’s about their nature, regardless of who you are, haters gonna hate.

Are you a hater?

If we look deep inside ourselves, as much as we would like to deny that we are “haters,” truth be told we are probably more like the haters in the way that we judge or falsely accuse others based on very little information. Some people are falsely accused and sentenced to prison, for being less than desirable.

What can we do about it?

Well, on social media, if you see someone’s post that seems crass or insensitive, maybe check out the individual’s profile to see if he/she is the type of person that you imagined they were based on a few words on a public post. You might be surprised to see a lovely person, who might even be a considered a “friend” if you met him/her face-to-face.

You just cannot rely on your first impression of a person based on a single statement, like or share. You do not know who they are, what’s happening in their life or what caused them to respond in that way. Chances are, if you had walked a mile in that person’s shoes, you would have done the same thing.

And it’s likely that you have liked, commented and posted something questionable, you’d rather not be defined by at some point. Nowadays, it is prudent to think before you post.

You might consider getting used to the idea that there are other people who are a lot more like you than not. These people also have histories, families, hopes, dreams, and beliefs just like you (though dissimilar) and that’s okay. Isn’t it?

If not, not to worry, there’s room for you, too… and we love you anyway.