Fear is a chameleon, able to blend-in to any thought process it can find in your mind to stealthily thwart any opportunity for growth or change. Fear is the driving force of your soul’s dark side that has the ability to masquerade as other thought processes, keeping you from achieving your highest and best. 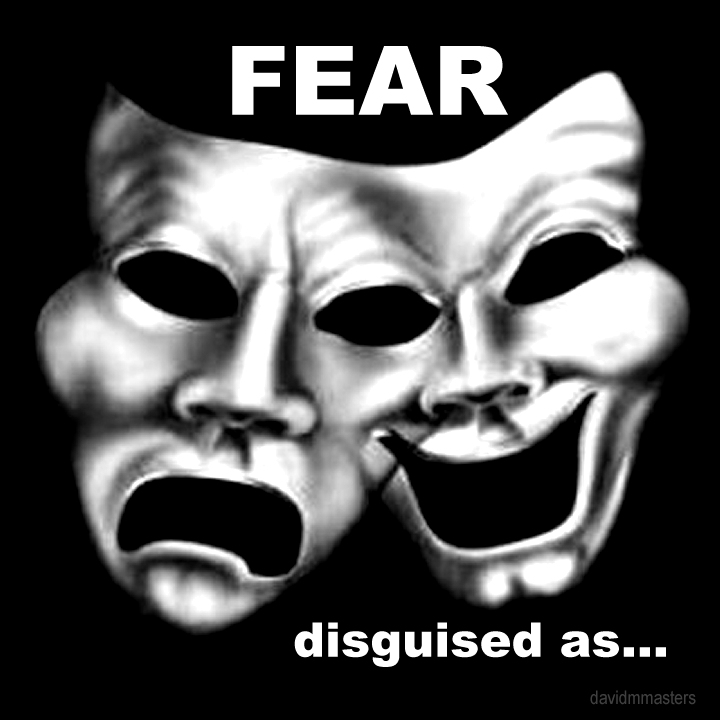 The fight or flight response is the most recognized form of fear in action. Certainly, flight is a fearful condition, but fear can masquerade itself as preparing you for battle. It can cause you to defend your position using disrespectful tactics, choosing (emotional) weapons of warfare to battle otherwise supportive or inconsequential people in your circle of influence. If necessary, fear can escalate your emotional state to anger or rage, compromising rational thought.

Often closely associated with fear, worry keeps you distracted with heavy negative thought processes that have little substance for reality. Based solely on fanciful thought-plays fear will have you second-guessing and running endless debilitating “what if” routines until your mind is moved to complacent inactivity, overwhelmed by fear.

“I don’t know, doesn’t’ sound right to me,” is fear’s way to keep you from entertaining an otherwise potential opportunity to make a change in your current life’s path. When masqueraded as doubt, fear often looks very similar to the kind of intuitive hit that someone gets from the heart which seeks to preemptively protect you from an otherwise unhealthy or even dangerous situation. This is the fuel that powers skepticism.

When you’re at a crossroads and are looking at alternatives and paths to research or pursue, fear will seek out and present and flood your mind with so many opportunities, that you mentally abort the entire idea from fatigue, making it possible to come to a rational conclusion or make a decision.

Whether as the result of overwhelm, or not, procrastination is fear’s tool that prevents you from being able to take action. Taking action is the key to moving you in any direction, keeping your life from becoming stagnant. Just thinking about moving in any direction causes fear to awaken and if it can convince you not to take action today – simply put it off ‘til tomorrow – it can keep you complacent as you reside yourself to only passively fantasize about any potential movement or change.

How many times have you failed to complete a thing due to feeling as though it is not good enough? This is fear disguised as making sure everything is just right, based on your lack of self confidence or fear of not attaining a certain level of perfection. More often than not, your intense attention to detail interrupted by any other of fear’s interventions, will stay off any potential hope of completion.

Creating a lifestyle based on responsibility or a sense of duty is fear militaristically acting out as a subconscious drill sergeant keeping you in-line with your dedication to conformity in a diligent lock-step fashion, disguised as “doing the right thing.” In a sense making you believe that staying the same is the right manner of living and to veer off the existing path would not be practical.

Making fun of other people or circumstances with sarcastic overtones is fear preventing you from seeing value in other people’s (society’s or the world’s) progress. Zooming-in and exploiting a mis-step or mishap due to the efforts of someone or something else to change or advance, is fear protecting you from any inclination to move forward, because you would not want to be mocked or made the fool for trying to do so yourself.

The idea of thinking that you’re safe and secure in your complacent circumstances is fear-based and thinking that you are far better off rigidly defending your current place in life can make you feel as though you are better off than others who have not dug and settled into their own life-long foxhole. You have a feeling of superiority and look down on others who are not like you. You may also see others as untrustworthy, adversarial and feel compelled to disrespect, bully them or put them down.

Being victimized is fear’s “safe haven” for otherwise progressive individuals. If fear can convince you that you have suffered a horrible injustice and keep you in a state of feeling victimized by others life circumstances or the establishment, it has built for you a nearly inescapable prison, where you can find safety only within its bars.

You’re basically bored or could care less about anything. Fear will keep you without concern for others, society, the world or anything that is, “not my problem.” This nonchalant lack of interest makes you lethargic and creates space within your mind, which will seek out meaningless activities or thoughts to keep you in a state of unconscious consciousness, unable to be affected by anything meaningful.

Fear drains chemicals (primarily dopamine) from the brain to reduce fleeting surges that may have given us enough motivation to actually make some progress. Fear seeks to maintain the status quo and reducing dopamine levels will keep you unfocused, maybe even lazy and less able to follow-through on life-changing moves (no matter how small).

Many of fear’s processes can keep you in a state of fatigue which can thwart and hope of possessing the wherewithal to see anything through to its logical conclusion.

Look Behind the Mask

If you look behind the mask and remove the costumes wielded by fear, you can see it for what it is. Once identified and exposed, you can seek measures to counter its effects if you so desire.