LOA for men is The Law of Attraction for Men by David M Masters. You may have attended an event sponsored by St Paul’s Free University or some other organization that doesn’t mind supporting and promoting a room filled with testosterone-driven men to embrace the principals of the law of attraction in the manliest of ways. This is the Law of Attraction for Real Men. 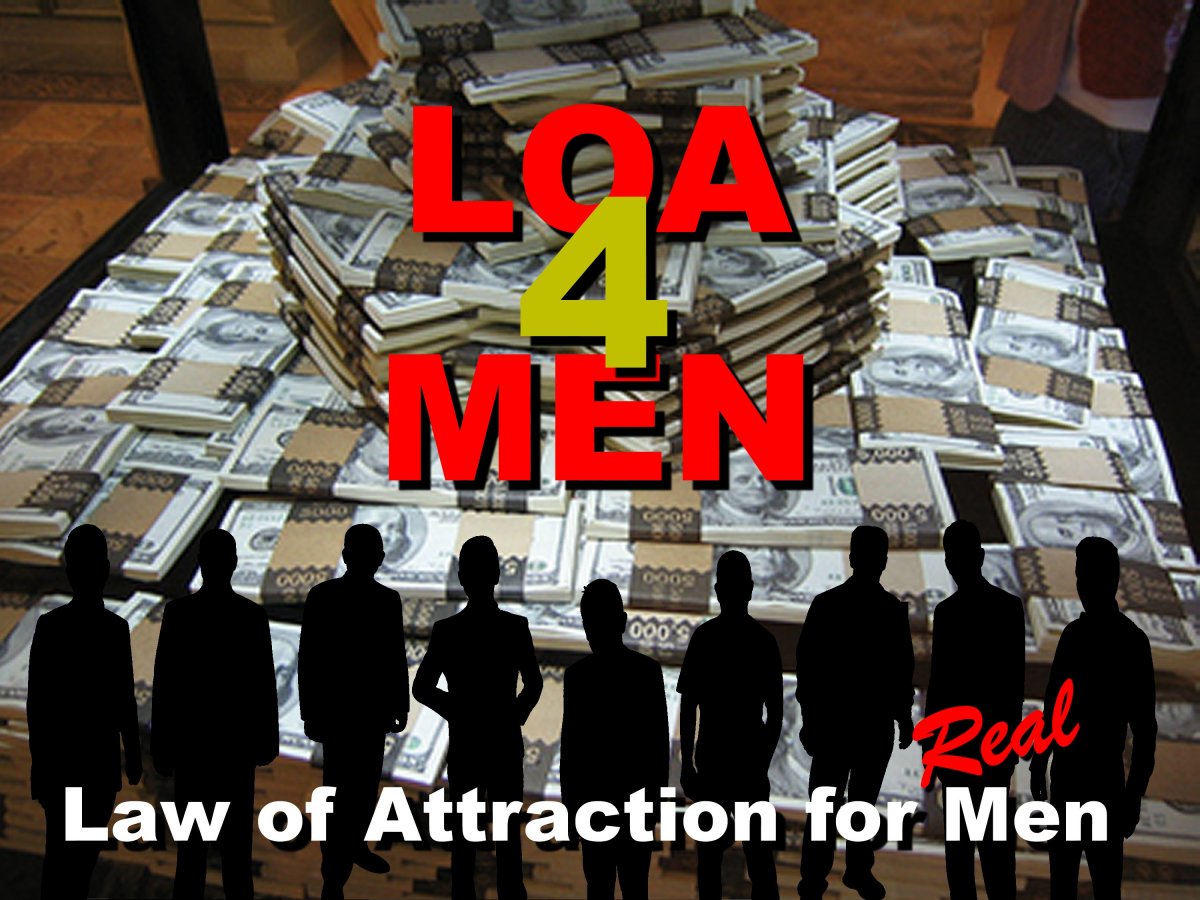 If you’re a real man, if you’ve heard of the law of attraction, and heaven forbid if you’ve learned about it from your partner or spouse, the idea of this namby pamby oogly googly curl up and suck your thumb in the fetal position while you stare at a candle, meditate, repeating mindless BS, just the idea of it, would be enough to make a billy goat puke.

Your partner says, “Hey babe, just do this and we’ll have everything we want in life.”

Have you lost your mind?

You are never gonna convince me, or any other real man, that I can accomplish anything through giving up everything I’ve worked for, denying the man I’ve become, stop the moving, my momentum forward, as I’ve fought the fight day in and day out for you and those that I love to sit and meditate in my pajamas all day long and daydream about living a better life?

You have lost your mind.

And if anyone else were to bring up such a crazy idea, you can just about face yourself and get out’a Dodge, and the horse you rode in on. You all don’t belong here. Nobody respects that kind of nonsense. Right?

I hear you. I know. This crazy thing happened and the law of attraction, which is a real thing, fell into the hands of a bunch of whiny weak-kneed baby-faced lazy losers, who were able to put it into action and raise the value of their lives. Then they started promoting the heck out of it, like some new peace and love religion.

But that is not what the law of attraction is.

And these people are NOT nice, benevolent, and loving people. They do not run around all day in their cotton jammies meditating and hoping that something good is going to happen to them, while they join their friends in singing Kumbaya around the campfire.

Nope, they are not doing any of that worthless crap.

They are out there dominating and moving their world and the rest of the world, commanding and demanding using the law of attraction, and you can use this same power for anything you want, if you know how, and anyone can do it, even you.

Now, I know the new age love religion folks are not gonna want to hear this, but it’s true.

The real law of attraction has been wielded most powerfully by the dominators, those people who possess more authority and power than you could possibly imagine (and probably wouldn’t believe it, if you could) every day. And they allow you to have your own little piece of it, as long as you stay weak, and you can live a better life. So have fun.

But right now, there are a growing number of men, real men, who are becoming aware of the law of attraction for real men, and they are changing their lives and the world, in more powerful ways than you could imagine. Look out for these men, they are the movers and shakers of tomorrow, and there is nothing that can stop them.

Oh, baby, I know you been meditating and praying for your husband,

“Oh dear God, please save my husband. Let him see that softness tenderness and laziness that has made me feel so much better.”

You’re husband just woke up to what’s really going on here, and baby, you just go on doin’ your thing, and God bless you for doin’ it, but your husband, he’s stepping into his sacred domination, and it doesn’t look anything like the watered-down law of attraction that you’ve been practicing.

He is stepping into this unlimited power source, he’s kicking ass and taking names like never before.

And you? You get to benefit from being with a man, who will love and care for you and make a massive contribution to others and the world at large.

Now, no one’s asking you to change, because ask yourself this:

How much good could the two of you do in the world working together with this kind of power?

This is the sacred union you were destined to enjoy.

Now, go forth and change the world in power.

And be on the lookout for loa4men.com because something powerful is brewing.