What do you say about me behind my back?

That thought is enough to drive a person crazy.

In your reality, what does it matter what someone says behind your back?

What if it’s my husband or wife?

Okay, I’ll give you that one. Even though it doesn’t really matter what he/she says about you behind your back, it can be a form of spousal abuse, certainly a betrayal of trust, so concern and action could be justified.

And I’ll give you criminal defamation and false accusations (could even be filed in court) may propose a threat to your survivability, so action might need to be taken to defend yourself.

But what I’m referring to is the murmuring that people do behind your back that seems to concern us so much. We can spend too much emotional effort worrying about what other people say.

I remember the first time that people started talking about me behind my back. It was after I exited the ministry. People just couldn’t wrap their heads around any rational reason that would justify what they perceived as me bailing out on God. So they talked… and rumors spread… some of the ones that made their way back to me were hateful, hurtful (and some were) hilarious.

I ended up relocating and I figure they found someone else to talk about. I’m so grateful that they didn’t have Facebook back then.

Years later, people started talking about me behind my back after a direct encounter with a criminal psychopath and his family. This time, it was post social media, and the defamation spread across the Internet, including twitter and Facebook.

My philosophy to start with is:

I’m not interested in what you say about me… unless it’s true. 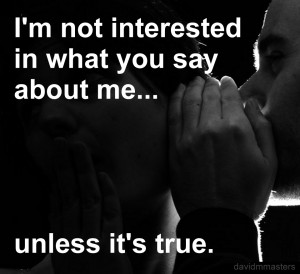 I am not going to dignify any false accusation with a response; so don’t even ask.

That is my personal policy. I really don’t care what other people say; but I think that if you’re going to jump on the ill-report-train, you would be better served doing some fact-checking before doing so. I’m just sayin’, you don’t want to look like the fool when the truth comes out.
Sure, people can use the Internet to cyberbully you but does it really matter?

I have a lot of friends who monitor their social media accounts like a hawk. The slightest negative comment sends them on the rampage. So, what about the haters?

There are going to be haters and thanks to the Internet, these otherwise silly-low-self-esteemers can hide behind their computer screens, tablets or phones and feel like a big, powerful bully by slamming someone on the Internet.

So let them. What’s the harm in that? Is what they said true?

In fact, I have a client who prays for people to talk bad about him on social media. Why? Because he’s in business and when a hater rallies against him, his sales increase. It’s not based on, “all publicity is good publicity – even if it’s bad,” it’s more like he benefits from having his name out there, and for people who have not heard about him, they fact check. The fact checking by an otherwise unknown potential client, turns into a sale and a satisfied customer. Go figure.

I like holding onto a phrase from the Bible (Genesis 50:20) that states:

“You meant evil against me, but God meant it for good”

It’s like you’re intention was to defraud, defame, hurt or destroy me but there was a higher purpose that came through.

When I was dealing with the defamation by the psychopath and his family, I let it go. When people would walk up to me and ask, “What about?” or “I heard…” I would simply reply, “I don’t know where you heard that, but you should go back and check for facts.”

Other than that, Masters don’t respond to nonsense.

And if you don’t respond, what happens? It just fades away.

If you feed the fire with a response in your defense, now it requires more energy – by the messenger, the reporter, the accuser and you. Do you want to go there?

You have to decide which battles you want to wage, and which you can walk away from.
For, me? I don’t care what they say, unless it’s true.

One thought on “What Are They Saying Behind My Back?”