Moving beyond the 7 Phases of Personal Growth the human being begins to transition into its evolutionary being, above and beyond its primitive peers and ancestors. The evolution of contemporary humans takes place in both the head and the heart, expanding the limits of human potential. This evolutionary process continues through 7 phases of spiritual growth. 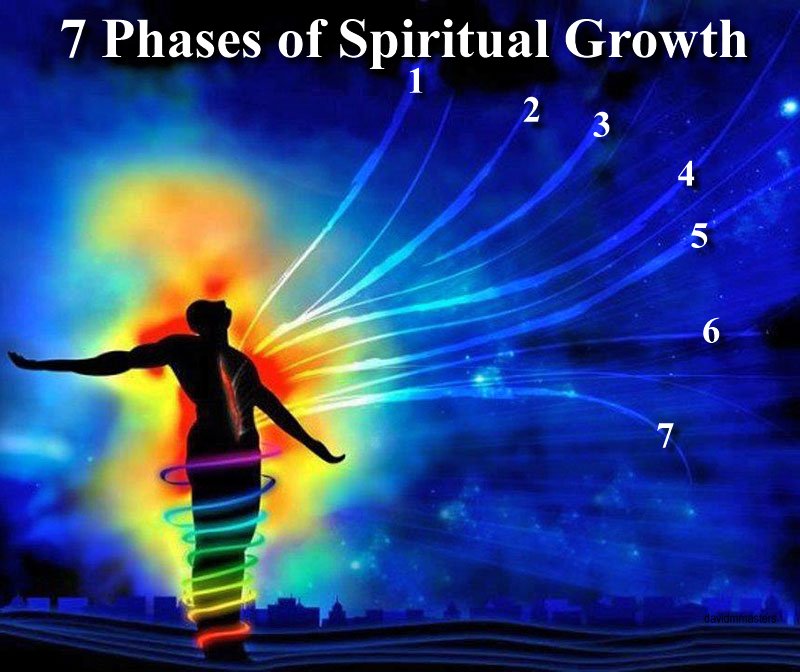 This is the first phase of spiritual growth when the individual begins to ponder there being something more to this life. He or she notices inconsistencies in life, the stories we’ve been told, how we’ve been raised, what we’ve been led to believe.

After the first shock to the system of your self-realization, of getting a glimpse of your being far more than you were told you were or could be and realizing that things are not as they seem, phase ones start to let go of psychological trauma, stress, guilt, and unworthiness.

Leaving behind the negative programming of society, the spiritual phase 1 becomes somewhat of a rogue, a lone wolf, and a reluctant leader. He or she finds a new sense of self and being and begins to go with the flow instead of forcing his or her way through life.

Personally inspired, this person, while choosing a path clearly different from his or her peers, becomes more natural, and is less concerned with goal-setting, as he or she becomes more actively focused on the greater good.

Embracing his or her ability to lead, the spiritual phase two inspires others to embrace the evolutionary process as he or is considered to be a visionary, spiritual leader, guru, or shaman, as they increasingly submit to the process of evolution and spiritual growth.

Those in phase two of the spiritual growth process are shining societal symbols encouraging others to consider new ways of looking at life and its unlimited possibilities, have a desire to help change their community and even the world at large.

As the phase 2 leader evolves into phase 3 he or she allows the higher power to do the heavy lifting of evolution. Empowered by the force of life multiplies their effectiveness in influencing others and the world to join in the evolution of society, mankind, and our planet.

The master becomes aware of his or her unique gifts and talents, finding his or her calling and unique message creating a niche for exercising him-or-herself fully alive, blessed, and moving about with the feeling or possessing this power.

This power is challenging for the master who has the utmost respect and fear of the power he or she wields in phase 3. In an effort to balance power with humility, it may also be difficult for him or her to accept the outpouring of blessing and abundance which is attracted by mastery.

In the spiritual phases of growth 1, 2, and 3, there is a symbiotic relationship, a cooperative interdependence among people. Unlike the phases of personal growth which vary from dependence to independence.

Phase 3 is the gateway to enlightenment.

Finding comfort in the balance of humility and being open to receiving blessings and abundance, the phase three progressing into phase 4 spirituality which becomes aware and is able to see that he or she is an active part, an extension of the cosmic consciousness.

Phase fours are part of the absolute, unchanging, and infinite greater whole, experiencing this life in tandem with the life not limited by earthly confines of physicality, time, and/or space.

Phase four brings with it a dichotomy of being one’s “self” observing life from one perspective and that of being aware of one’s unlimited higher self at the same time. This is the key perplexity which the phase 4 faces in this evolutionary process, as their enlightenment continues to grow and expand.

Once the phase four has fully accepted his or her humanity and divinity simultaneously he or she evolves into God consciousness. Fully aware that God is everywhere and everything, in and through all things, is never-changing yet ever-expanding, eternal, and only the greatest goodness.

There is no longer any of the confusion of separateness which is felt by the phase 4, as the idea of the oneness of self and the source of all life is understood and embraced.

In phase 5 one can experience the full range of life on this planet as well as beyond, finding new ways to integrate with both ends of the spectrum of all life and all its unlimited possibilities.

In the sixth phase of spiritual growth, you are aware that everything (EVERYTHING) including everyone, all things seen and unseen, possibly experienced and not yet experienced, past, present, and future, on the planet and unlimitedly beyond is all one and the same.

Everything is fully integrated. You are God experiencing life from a unique perspective and there is no disconnection from anyone of anything in this experience.

This phase is the passing from this dimension to another which may, or may not, be accompanied by death. As the evolution of the human continues there may be the ability to move freely among all dimensions and worlds at will while still retaining your own unique consciousness.