Just like anything in life, we all do different things for different reasons. How does that apply to how you use Facebook? It depends on what kind of person you are and what you get in return from using Facebook. Here are the Top 20 Types of Facebook Users. Which one are you?

Some Facebook users aren’t really users at all, they’ve simply dipped their toe in the water to see what it’s all about. They may have friend requested you, but are rarely online, or interact with anyone inside the Facebook community. May log-in to look around for a while, but not ready to jump in, yet. Their life is probably consumed with activity in the world which exists outside of Facebook.

The Facebook Newbie can range in age from four (with parent’s permission) to ninety-four and they want to interact using Facebook but break all the unwritten social networking rules. They innocently offend and interact inappropriately, but it’s all kind of entertaining to watch someone so naïve spreading their wings and learning to Facebook. We laugh, we cry, and we help them along as best we can, so as not to scare them off.

The Casual Facebooker is a step beyond the FB Toe Dipper in that they do log in periodically to interact with friends and relatives using Facebook. They don’t spend too much time logged in and do not take full advantage of the tools or resources of value to this powerful social media platform.

Some people have to announce everything that’s going on in their life, such as, “I just woke up,” followed by myriad details about what happens throughout their day complete with photo documentation, and commencing with, “Good night.”

Then, there are the lonely hearts, in various stages of amóre who wear their hearts on their sleeves. Either they’re blissfully in the throes of romantic love, or they are heartbroken beyond compare (and may vacillate frequently between these two extremes).

6. OUR FB OF GREAT SORROWS

Our Facebook of great sorrows group is constantly airing the wounds of their depressive pain and discomfort about everything bad that is happening to them, or someone or something else. It’s as if they are determined to make everyone on Facebook feel as awful as they do.

Attention seekers will use any means to break through the white noise of Facebook’s drone. They will use pain and suffering or success and happiness (augmented by photos of babies and kitties) to get the attention (and likes) they so desperately seek.

Lifeless gamers are the folks who have so much free time on their hands they waste it on mindless games which abound on Facebook, and they annoy the non-gamers with relentless requests to join them in a game or to take an action or click on something, so they can get points or advance to the next level.

The selfies are all about themselves, frequently take and post pictures of themselves (selfies), often changing their profile picture, and letting us see them placing themselves in various environments to take and post yet another selfie. They usually see themselves as one of the beautiful people or don’t (and hope that all this selfie-ism will make them feel better about themselves).

The I-wanna-be-a-rock-stars are those Facebookers who hope to be recognized for their talent or rock musician bravado by posting pictures of themselves in makeup, attire, and various performance poses (with or without music gear) to be discovered and make the transformation from wannabe to a real rock star.

Then there are the obsessive taggers who tag hordes of disinterested and/or unassociated Facebook users to various photos and events in the hopes of getting the coveted like(s) thereby validating their efforts and/or life.

The don’t-you-wish-you-were-me-ers are constantly updating their Facebook timeline with photos of amazing activities, places, and events they are participating in, in real time. It’s not photoshop, there are just bragging on Facebook, while most followers are both impressed and jealous.

The creators actually create, add, and share valuable content with the Facebook community, everything from original artwork, poems, thoughtful stories, wisdom, and memes. They are not self-seeking, only using Facebook as a means to share their creative abilities (and some are quite amazing).

Facebook photojournalists are Facebook users who have purchased a nice digital camera and take pictures of everything from bugs and wildlife to still life and landscapes (and everything else imaginable). They assume you’re having access to their Facebook account to peruse their immense photo gallery (galleries) will impress you. If you are at an event they attended, they are likely to post a photo of the event and tag you in it, if they can.

False news reporters abound on Facebook. These folks are waiting for the next unbelievable and shocking news headline/story to flash upon their timeline, then proliferate the information by immediately sharing it with all their friends, insisting they do so in kind to save the world from such an injustice (or whatever the meat of the fake story might be).

The Facebook Intolerants are the users who are so immersed in a particular thought pattern or belief system, that they are completely incapable of seeing the other side of any issue and will argue via negative posting, slamming anyone who does not agree with them, to try to start an FB fight online. This is a form of abuse, but one that pays off, when two sides (opposing Facebook Intolerants) of any emotional issue get fired up.

Facebook marketers can be relentless, and Facebook encourages them to market their wares and services to other Facebook users. As annoying as the marketing may be, Zuckerberg is trying to make the advertising experience much less offensive than other types of advertising you might see on the Internet (and the revenue from these “sponsors” is what keeps FB free, and Zuckerberg rich). Other FB marketers are using other types of Facebook interactions to connect (and annoy) their potential customers.

Facebook Manipulators are the sneaky Facebook users who are well-versed in the use of all the Facebook features and filters. They generally have a devious side but are not malicious in nature. You might look at their profile while logged-in from your account and see one thing, and from someone else’s account, it could look very different, for whatever reason.

Not to forget the Facebook Stalker (AKA Internet Trolls using Facebook) who possesses and maintains several alternate identities on Facebook just for spying (and commenting on) profiles of Facebook users that might rather be unmonitored (for whatever reason) by the real person in question.

Facebook Predators are those who may or may not create fake Facebook profile accounts to defraud or otherwise take advantage of Facebook users who may not possess a decent BS-filter, leading to loss; loss of dignity, loss of mental health, loss of finances, time, or life itself. FB-user beware.

Did I miss anyone?

Okay, we can all agree that our children (those adorable young cyberspacers) need some coaching on how to safely use social media. There are apparent security risks, like predators & stalkers, being mindful not to post too much personal information (which may mean not posting when and where you are in real time, not posting pictures taken by a camera which includes physical location of where the photo was taken).

We encourage our children to be polite and respectful, warn them not to engage in gossip or putting others (including classmates) down for fear of promoting cyberbullying or creating disrespectful or dangerous social situations in real life school. 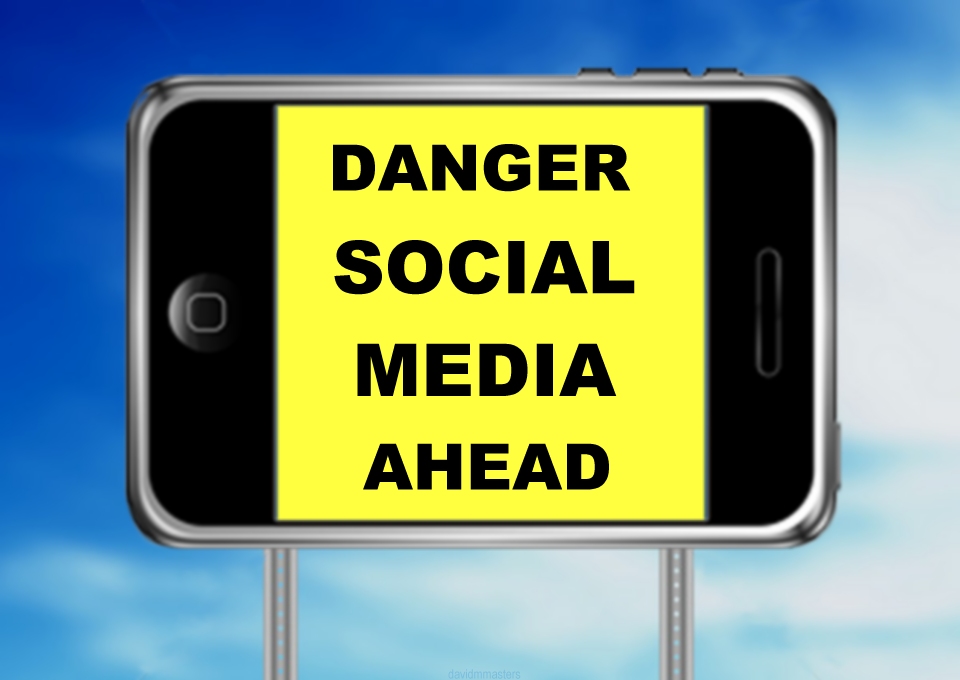 What about the dangers of social media to you?

You don’t think about that much, do you? I’m not talking about the potential threat of Big Brother nosing around your data or tracking every move you make. No, I’m talking about what danger might you expose yourself to by using social media?

We’re aware of the threats and consequences we’ve read about in the headlines, like people posting their vacation photos in real time and coming home to a home that’s been robbed while they were away (and a hundred, if not more, stories related to posting your location).

For families, the same threats apply for attracting predators for proud parents, as it does for our children (but we might be less likely to take that into consideration). For single adults, there are different kinds of narcissistic predators, psychopaths and stalkers waiting to exploit your social media postings, and the list goes on and on…

Not to mention what is social media doing to us as a culture. Most of our face to face relationships, even voice to voice relationships, as we move our social interactions from real life and even talking on the phone to the more convenient and less intrusive social media platforms. It appears that authentic social interaction is morphing into reclusive voyeurism. I’m not convinced this is an upgrade.

More importantly, I am concerned about the dark side of social media, a place where people can mock, put-down, bully, disrespect and spread hate like a wildfire without any social responsibility. Personally, I choose not to participate in negative social media campaigns, and there are so many to avoid.

Then there are the haters. A hater’s gonna hate and there’s nothing you can do about it. The best advice, if a hater starts hating on you, is to ignore it. Responding to haters or attempting to defend yourself only adds fuel to the fire.

But mostly, I’m concerned about what we inflict upon ourselves by posting our own negative campaigns. I see people that I care about deeply in real life destroying their lives by posting negative comments. These seemingly harmless postings attract more of what they don’t want by declaring to the universe in the most poignant way possible, “I don’t like,” or even worse, “I hate,” whatever follows… and whatever follows is like placing your prepaid order with Amazon for even more of what you posted, with free shipping.

And it breaks my heart to see this simple rule of thumb proven over and over again. I see someone posting about how much they dislike or disapprove of something, then in a few days or weeks, they’re posting about how they were visited by something worse; and if their declaration was extremely vehement, far worse.

On the other hand, there is a camp of folk who are completely the opposite. They post primarily positive and supportive items on social media and they seem to attract more good news and happiness to their lives. I believe there is a connection. 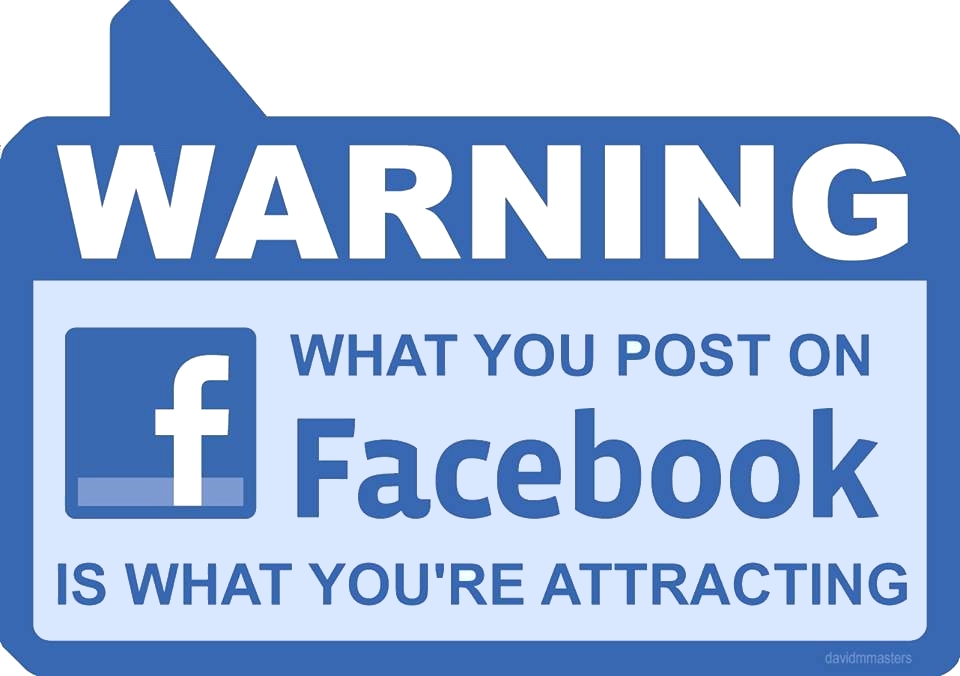 Avoid the danger of adding more misery to your life by posting negative comments online.