That’s what the deceiver says when being confronted by the truth coming out about something they knew would rather have kept secret. That’s why they did not disclose it in the first place. But the crafty deceiver holds fast to the idea that because they didn’t actually say anything that was untrue, so their superior intellect and “morals” are supported by the idea that they did not lie.

The question that comes up in counseling is, “Is withholding really lying, since they haven’t actually verbalized a lie?” Good question. While there are hundreds of possibilities, it largely depends on the participants and their belief systems. But regardless of what your belief is (even if you think it’s okay for you to do) when it happens to you, all of a sudden it doesn’t seem so right. 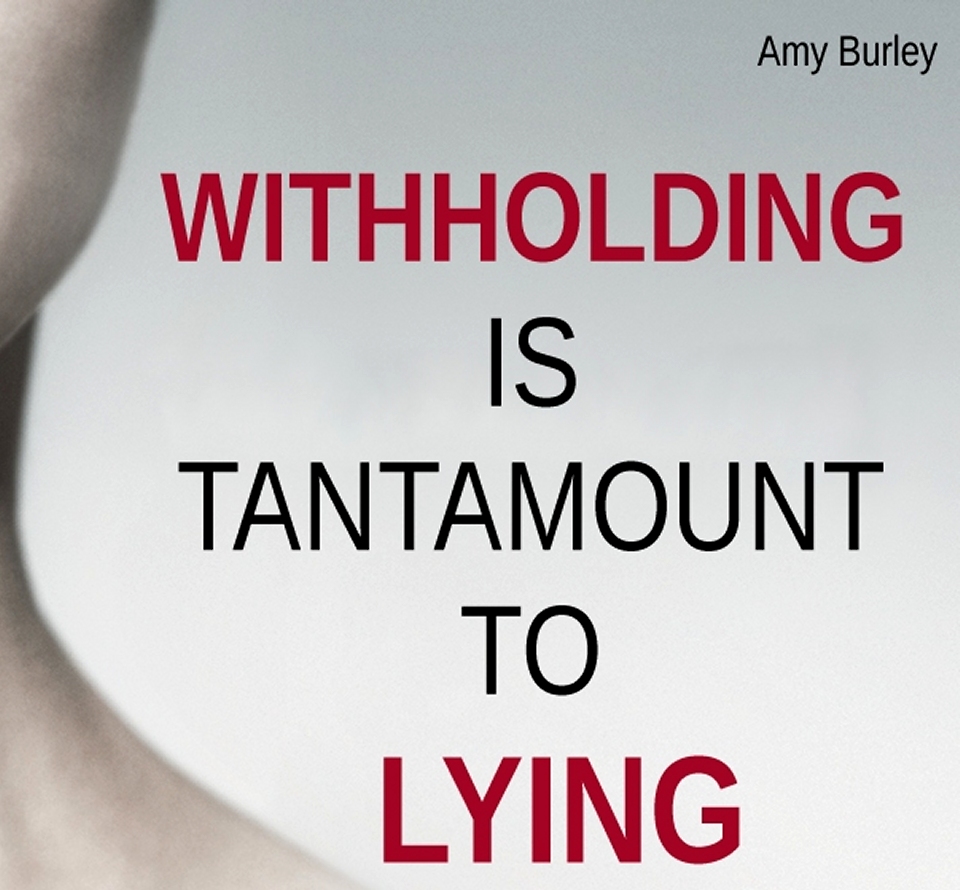 From a trained Catholic point of view there are two types of sins; the sin of commission and the sin of omission. In terms of lying, actually telling a lie would be a sin of commission, while withholding would be a sin of omission, both sharing equal consequence. Regarding the sin of omission, Jesus’ brother says, “Whoever knows the right thing to do and fails to do it, for him it is sin.” (James 4:17) which incorporates so much more than the unspoken words, actually including the right thing(s) one should have done but didn’t do.

But in a relationship, is it really all that bad to purposefully not disclose certain information that really wouldn’t accomplish anything but hurt someone’s feelings? Someone who thinks this way might say,

“I’m not lying, and I don’t see the need to hurt someone’s feelings when I didn’t really do anything wrong.”

This is due to the gray area representing activities or indiscretions that could have been worse.

“My friend’s mom is sick and he has to go to meet with his attorney and go to night court and he wants me to be there with her, while he’s gone.”

This doesn’t seem unreasonable so your boyfriend heads out to his friends house. He has his cell phone with him, so you can stay in touch.

“I forgot my charger, battery’s dying. I will text you when I get home.”

In this day and age, that could happen. You might even remember a time when your phone died, like that.

A couple of weeks later, you run into a girlfriend who saw him at a concert that night, and you assume she must be confused, because you know where he was that night.

As it turns out, the truth was that he did go over to his friend’s house to sit with his mother while he took care of his legal issues, but what he neglected to tell you was that he went to the concert with friends.

Regardless of what else may have happened, you were not made aware of his other friend’s extra concert ticket, and he neglected to tell you that, because he thought you might get mad, if you’d have known. Since nothing bad happened (like copulation), there was really no harm in sparing your feelings needlessly.

He may justify or think, he was only looking out for your best interest in the deception by omission.

Whether his concern was innocent, or not, the fact remains there was purposeful deception. In this scenario, the boyfriend indirectly lied as he omitted critical and important details, to deceive. With the intention of allowing you to believe all is well, and there was no opportunity for transgression.

Another example might be the urge to use a vague response to a question like, “What did you do last night?” A vague answer might be, “Oh, nothing, really.”

The key here is to remember that it’s just not sociopaths who use these slick methods of deception. People just like you and me do it also because we know that it’s wrong to lie, so we don’t want to do that. Because we have a conscious, it somehow feels better to tell some of the truth and to leave out the pertinent details that might otherwise cause needless confusion or conflict.

No one can really say if it’s right or wrong, but the truth is, if you feel sighted, hurt, betrayed, or indirectly lied to, then it’s definitely not a good thing. This is not a healthy state of mind to be in for very long.

We all deceive using different motives, such as making ourselves appear to have it more together than we actually do, to hide sensitive details or information (which may have negative consequences), and to hurt someone (maliciously, or in self-defense).

So what can you do when someone has hurt your feelings by withholding information?

Try to avoid labeling him or her as a liar. Allow him or her the opportunity to disclose the non-disclosed portion of the story on their own. Try to keep your emotions in check and instead try to think about why he or she would feel the need to withhold. Maybe some counseling might be in order, if they have unresolved issues, addictions, or trauma from the past.

Communicate where your boundary is on undisclosed information, make sure he or she understands, and hope this doesn’t happen in the future, while keeping in mind that you cannot change someone or expect them to change on command. The best you can do is to communicate your expectations and hope for the best. And if you find you cannot live with this type of behavior, then you must do what is right for you.

No one expects anyone to be 100% honestly disclosing everything 24/7, that would be unreasonable and abusive.