Revenge vs. Tolerance begs the question, “What is your reaction when you are faced with a concept, situation, organization or person that you vehemently disagree with?”

You could have a strict and concise, completely opposite point of view, or feel as though you have been slighted, attacked or betrayed by an imposition or affirmative action.

What you do about it say a great deal about the kind of person you are. 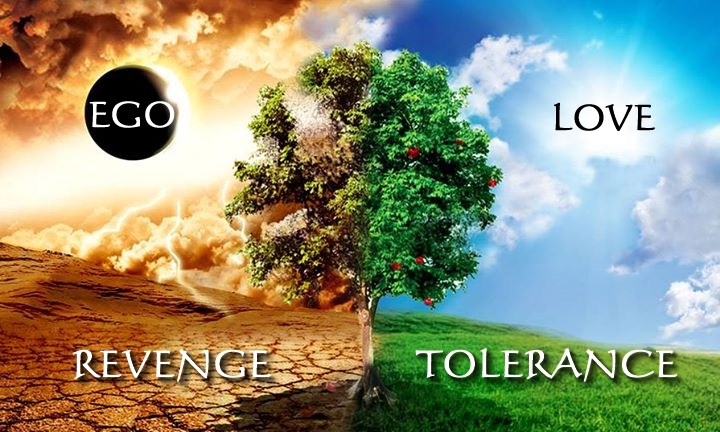 Certainly there are many actions and reactions you can take, and like most things in life, the options vary among a spectrum of possibilities. At one end of the spectrum is Ego-fueled Revenge, on the other Love-inspired Tolerance.

Revenge is the defense mechanism of the ego and is highly addictive. The ego responds negatively to any idea in contrast to its own individual position. The wider the chasm between what the ego holds dearly and the opposing force or idea, the more violently the ego demands restitution.

While on the surface, the idea of revenge might seem just, “an eye for an eye.”

You offended, hurt me or my feelings, now you must pay dearly.

And there’s a romantic appeal to exercising justice in this manner, and it may be a lifelong compulsion overshadowing all aspects of your life until the need for revenge is satisfied, not unlike Inigo Montoya’s, “You killed my father. Prepare to die.” © 1973 William Goldman “The Princess Bride.”

You see the idea reflected every day in the media headlines in newspapers, on television, the Internet, radio broadcasts and is often reflected in casual conversation among friends, in cafeterias and around the water cooler at work.

The problem with the ego, is that it is not just. There is no other more selfish or disrespectful perspective from which to launch any action. Unfortunately, Albert Einstein accurately depicted the result of any action with his, “with every action there’s an equal opposite reaction.”

For the spiritually-inclined, this confirms the idea that there is a Karmic debt which accumulates with every action we take (which may also include our thoughts).

Where justice represents an equal eye-for-an-eye point of view, ego’s revenge exaggerates the difference to include psychological damages far beyond just the facts, causing any reaction to also be exaggerated. Instead of being an equal response (which might seem reasonable or just) the over-enthusiastic response swings an energy-charged pendulum.

Once the pendulum has swung full force, there is an initial sense of relief that justice has been served… only, as we all know, the pendulum will return to the one who launched it to exert its Karmic energy. Not good for the person who launched the counter-attack, or those within arm’s reach of the initiator of the revenge.

Tolerance, on the other hand, is inspired by love and promotes peace. Love does not seek revenge and is not destructive. Love honors justice but does so selflessly with compassion and respect. Love does not demand compliance, nor does it encourage victimization on either side.

The perspective of someone who may be the recipient of an injustice who is motivated by love rather than ego will respond with a different frame of mind.

The tolerant individual is more likely to imagine what it might be like in the offender’s shoes, wondering, “What may have contributed to this?”

Often, when looking at the entire picture, from the perspective of the other person, organization or thought, you can see how the combination of logic, emotion and circumstance has led to this thought or action that opposes your own sense of truth.

Tolerance is not the condoning of an opposing view, only allowing someone else to have (and hold tight) to such a view.

A tolerant response would be not to defend your position (pushing the pendulum) but to pursue a separate course of action to promote your point of view not directed to the opposition.

This is the enlightened response of tolerance.

Taking the action to promote your position is far more effective than defending your position from an argumentative point of view.

So, what it comes down to, is answering the question, “What will you do about it?”

Would you rather push the pendulum in defense or make a stand, promoting your position in love and allowing support to be attracted to you?