Learning to deal with difficult people is like learning a foreign language.  It’s well, shall we say, difficult? But as challenging as it is to develop fluency in conflict situations, it’s just as hard, if not harder, to learn to detach yourself emotionally from the outcome. 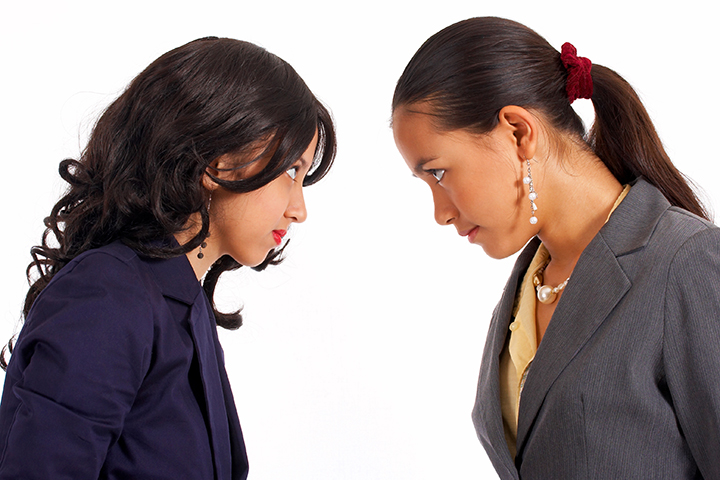 It helps to think about it this way: drama is a childhood phenomenon.  So whenever you are faced with hysteria, irrational thinking or out-of-control emotions, know that there is simply a child in the room – a fully-grown adult child, but a child nonetheless.

See, underneath difficult personalities there is an unhealthy, undeveloped, unsatisfied ego who is acting out. Since these egos are remnants of childhood, normal, rational thinking does not apply.  They live to ensnare you into their reality when something has happened to make them feel insecure.  But, it’s a time warp.  Do not go! If you do, you’ll end up mired in another person’s emotional environment that is rooted in the past.

Of course, not being privy to that past, you have no idea how the person is allowing his or her ego to distort the present.  All you can do is manage it from your perspective the best you can.  The key is to stay steady and not get drawn in.

Easier said than done, I know.

Chances are, if you’ve been in the workforce for any amount of time, you have crossed paths with some of these ego-laden “characters.”   Here are some things you can do to help manage the conversation and the person to whom you are trying to talk.

Think Tasmanian devil. These folks are volatile, inconsistent, and unpredictable. They fly off the handle easily and feel empowered by making others walk on eggshells. They stifle free dialogue by shutting other people down, and they kill the possibility of having productive conversations by breeding insecurity in their relationships.

Weather the storm. Remain calm no matter what.  If you ever heard a story about what to do should you find yourself face-to-face with a lion in the wilderness, you know your only chance at survival is to stare it down, eye-to-eye, and remain still until it is convinced by your lack of fear that you are not the perfect prey.

“Whoa, hold on,” and then don’t be afraid to ask the Ticking Time Bomb to simply stop. Request that he or she refrain from snapping, bullying, abusing, ranting, raving, etc. . .  State that you don’t do well under attack and that you would like the conversation to progress in a mutually respectful way.

Don’t make it harder than it has to be. On many occasions, I have said to people who felt the need to push me around, “Please don’t bully me. I don’t like it.” It works!

The Centers of the Universe

These people have a bad case of me, myself and I myopia. They only see themselves and have a distorted view of their own importance in the world. Communicating with them effectively is a challenge because they don’t listen, unless, of course, you are feeding their egos, which is more about them. They filter what they want to hear, taking what feeds their egos and rejecting anything that doesn’t fit into their delusion that the world revolves around them.

Don’t take the bait. Centers of the Universe will have you as twisted as they are in no time if you play into the game that they are playing with themselves. Stay on track and do not allow yourself to be reduced.

Nothing. Ignore the bravado, and don’t engage in their histrionics – just stick to the facts.

These guys and gals are negative, negative, negative! They refuse to explore alternative possibilities or open their minds. They obstruct important dialogue from occurring because they are stuck in a world of small-mindedness.

Ask questions. Every time a Buzz Kill tries to put the kibosh on something, try to find out why he or she feels the need to choose failure over success before even trying.

“Why must you put a damper on everything?” Point out how their pessimism is grounded in nothing substantive and that whether they know it or not, they’re making everything harder than it has to be, including trying to have a conversation.

The Slippery Sly Ones

Watch out for this group. They are underground operators. They undermine healthy dialogue and erode trust by feigning authenticity and operating under false pretense.

Call them out on it. You have to, because when the ego knows you see it, it has nowhere to go and nowhere to hide. By merely revealing your awareness of its presence, you will often shame that part of the Slippery Sly Ones into minding its manners.

“Something doesn’t add up here.” Or, you could say something like, “This does not feel kosher . . . or cool . . . or copacetic . . . or right.”  Remember, it is perfectly acceptable to tell someone what you think and how you feel.

We’ve all known our fair share of these. It’s their insincerity that makes it so difficult to communicate with them. They’ll “yes” you to death in lieu of having a meaningful conversation.

Make it clear that you would prefer not to have a conversation that consists only of agreement and accord.

“Please stop. . . .” Point out that they don’t need to work so hard to look good and that it is infringing on your ability to move forward with them in the conversation.

This bunch is really out there. They exist in their own reality, which is unrecognizable to almost everyone else. The problem is that real issues aren’t addressed while they detract from the clarity needed for constructive conversations.

Have the conversation and cross your fingers that the Oblivious “get it.” Give it your best shot and document everything that is said because when it comes up again, the Obliviouswill have no idea what you’re talking about.

“Snap out of it.” You can ask them to try to step out of their own reality and face the facts as they are, but don’t hold your breath.  All you can do is try.

These kids trapped in adult bodies are more draining than a marathon. They sap energy, waste time, and turn the workplace into a day-care center.

Point out specifically what is juvenile about their behavior. The best thing to do is express your amazement that such behavior exists in a professional, adult, work environment.

Tell them point-blank how unbecoming and inappropriate their behavior is.

The preceding is a reprint of an article featured in Psychology Today by  Author of Surviving Dreaded Conversations, Donna Flagg, who said it better than I could have. Stretch your mind and your body by visiting Donna’s site at Lastics.com