What do you believe? Whatever it is, you’re probably pretty well attached to the idea, so much so, that you’re willing to defend what you believe, even risking life and limb in defense of your most highly held beliefs. So, what do you believe?

Due to the proliferous American culture, there’s a good chance when you were young, you believed in Santa Claus and/or the Easter Bunny. Then, one magic day, your belief bubble was burst, and you became aware what you previously held to be true, was not. This, or some other youthful belief awakenings, signaled the introduction to your continuum of beliefs.

As you move through life, your beliefs are in a constant state of flux, morphing and changing as you are exposed to new information and emerging thought which causes you to revisit and reevaluate previously held beliefs. It’s all a part of the process of growth and expansion. 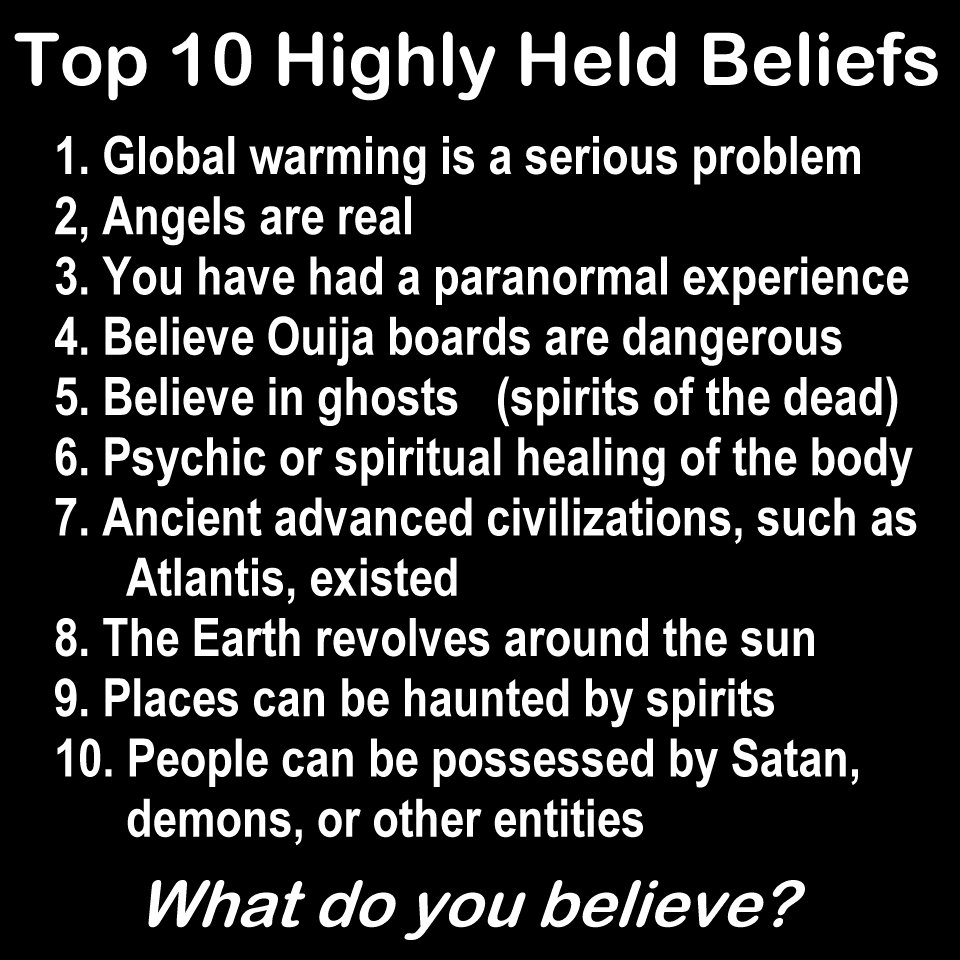 Americans believe a great many things, here are some examples, which depending on where you are in your belief continuum, you may, or may not, believe:

Global warming is a serious problem
Angels are real
You have had a paranormal experience
Believe Ouija boards are dangerous
Believe in ghosts (spirits of the dead)
Psychic or spiritual healing of the body
Ancient advanced civilizations, such as Atlantis, existed
The Earth revolves around the sun
Places can be haunted by spirits
People can be possessed by Satan, demons, or other entities
Believe in ESP (Extra Sensory Perception)
Aliens have visited Earth in our ancient past

When you enthusiastically align yourself with a particular belief, it is filed away in your collection of known facts or truths in the brain, and the ego will exert toxic amounts of energy to protect these ideals, as they give us a high-level sense of safety and security as we navigate the world around us.

We tend to compare, measure, and judge life and others around us, constantly comparing it to what we know to be “true,” even if there is no real constant in the belief continuum. From the perspective of the continuum of beliefs, it is difficult to perceive beyond our own fear and expectations, because we are trapped within the belief spectrum which causes us to project and predict outcomes based on that which we believe to be true.

When a highly held belief is challenged, your brain releases dopamine as a method to emotionally charge or invigorate your defense of your belief, so you go about your fighting for your right to believe, without the benefit of having the logical part of your brain fully functional.

This is the same system which is triggered when you are threatened by the potential of being eaten by a ferocious tiger, lion, or bear (oh, my), which we refer to as the fight-or-flight response. It’s what motivates our heroes, such as military, police officials, fire fighters, and others in protective services to risk their lives to save others.

Only after we have recovered from the initial shock of being chemically dosed and influence, and our brain chemistry begins to return to normal, can we begin to sift through and newly exposed data to evaluate a new rational conclusion.

Knowing this can be a huge advantage to those who are actively engaged in being exposed to new ideas and emerging thought patterns.

You can learn how to control the beast within, and many have, but the pendulum can swing so far in the opposite direction that you might find it easier to deny it, or turn off the system altogether, deciding to believe in nothing.

Although, to think that it is possible to believe in nothing is, well, impossible. But you can decide not to believe in what everyone else believes.

Even 20% of atheists consider themselves, “spiritual but not religious.”

Everyone believes in something, and you are emotionally charged about it, whatever it is, whether it is the brand of car you drive, clothes you wear, or bag you carry. Anything from your favorite artists, your mentor(s), electronic devices, or favorite video games are all connected to this belief continuum.

We all have a strong inclination to admire and worship something; if it is not a higher energy, we replace the need to focus our admiration on other ideals, people, other forms of life, or material things that give us a reason to feel like we have something outside of ourselves to value or regard endearingly.

What do you believe?