Hello, my name is David Masters and I’m the author of the Psychopath Victims Toolkit.

A little about me, I’ve been counseling and consulting since the late seventies/early eighties. Occasionally, in the course of my coaching, I would encounter a client that had to mitigate the damages in their life due to the influence of a third-party individual, a “bad person.” 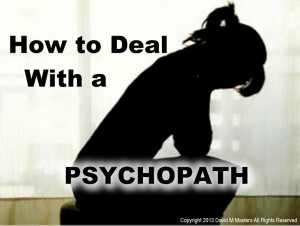 From my perspective, there were no such thing as bad people, just lost souls wandering aimlessly through life with little regard for others; and so, the advice that I gave to individuals in those days was very different than I might suggest now.

What I learned, was that there are people who are devoid of particular mental, emotional and spiritual components that compromise their humanity when integrating with other persons, we call these people psychopaths, sociopaths and the recent, more political correctly referred to as being on the Antisocial Personality Disorder spectrum.

That said, there are thousands of variables and no two psychopaths are identical, but they do share many similar characteristics. 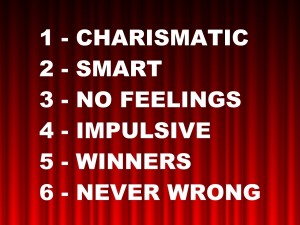 Psychopaths are charismatic and are able to attract supporters easily.

They are wonderful speakers who are able to engage their audience and can easily engage the emotions and attention of those fortunate enough to be in their presence.

They exaggerate stories skewing the truth for their self-serving benefit and will go as far as to lie and place themselves in someone else’s story and claiming it is their own.

Psychopaths are intellectual. They have a gift of having incredibly sharp wit and intelligence enabling them to masquerade as highly-educated as they bob and weave socially in live situations.

This also makes them excellent con artists able to conceive, plan and execute elaborate schemes, while staying one step ahead of the authorities.

Psychopaths have no feelings. They do not grieve, are incapable of feeling guilt, shame or remorse, empowering them to easily victimize anyone. They will enthusiastically engage in anything that bolsters their position at someone else’s expense.

They do not love. They are incapable of giving or receiving love, but terribly acute at acting as though they are madly “in love,” if it will help them achieve a desired result.

They are great actors/performers giving them the ability to create any perception of themselves that will achieve for them their desired result.

Even though they can appear to have emotions and use them as tools to manipulate their victims, let there be no doubt, they have no real feelings whatsoever.

Psychopaths are impulsive, often acting or speaking without thinking through potential consequences of their words or actions, and are more likely to spontaneously take risks.

They are free of repercussion since they see themselves as above the law or the constraints of the social norm. No social filters, consequences or guilt.

Psychopaths never lose. They will dominate anyone who gets in their way, will viciously defend their position, often by telling lies and spinning wild tales in an effort to discredit anyone with the inclination to disagree with them.

If you are naïve enough to challenge them, be aware that they will wield their powers of persuasion to make you look like a fool for questioning them. Which presumes that they believe themselves to be:

Psychopaths are always right. They never apologize; do not feel remorse for hurting others and are incapable of feeling guilt.

If asked to apologize, a psychopath will often strike out and attack their victim, rather than admit they may have made a mistake or misstep.

Now ask yourself, is the person you’re dealing with a psychopath?

Are they charismatic, smart, have no feelings, impulsive, always the winner and never wrong?

Chances are, you’re face-to-face with a psychopath.

You’re probably saying to yourself, “I knew it. I knew there was something wrong with that person…” You are realizing that you should rely more on your intuition that may have been warning you when you first met this person that something was not quite right. If only we learn to listen more to our gut, we would live happier, safe and secure lives, free from those who seek to exploit us.

If nothing else, that is the lesson to be learned from encountering a psychopath, is to trust your instincts and to not let yourself be taken advantage of by a cunning predator.

I would not, now, be an expert in the field of psychopathy had I not had my own first-hand experience with an evil psychopath that opened my eyes to the realities of the disorder. And now I have deep regret for all the folks that I was ill-equipped to be compassionate enough to reach out to them appropriately.

In this way, I may have attracted this psychopathic presence in my own life to benefit those whom it is my calling to assist along their life’s journey.

So, we’ve established that you have found yourself to be the unfortunate victim – or mark – of a psychopath, sociopath or someone amidst the antisocial personality disorder spectrum…

What Can You Do About It?

How to Deal With a Psychopath 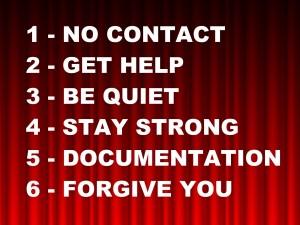 The very first thing to do is to create as much separation as you can as soon as possible between yourself and the psychopath.

You need to distance yourself physically, financially, emotionally, spiritually and in any other way possible from the psychopath and cease any and all communication with him or her, period.

Any further communication or contact after correctly identifying a psychopath will only lead to more risk or potential loss to you and yours.

You must cut them off. No contact, means no contact. Though this may not be possible, if you work or live with the psychopath; but that will be an issue to be handled specifically and independently of the scope of this primary message.

Next, you will need a strong support system. You should seek out a professional, a counselor or therapist, with experience in dealing with psychopaths. Note that early in my practice, even though individuals sought me out for assistance, I was ill-equipped to offer them the support that they needed at the time.

Seek out a specialist, or at least someone with experience dealing with victims of psychopaths.

Do not talk to your friends about the psychopath. You might think this is a good time to reach out to those in your circle of friends that you can depend on for support, but chances are (if the psychopath has done his or her homework) they have already gotten to them in advance.

If your friends have not been compromised by the psychopath, there is a good chance that they will be, and be forewarned very few people can compete with the ability to manipulate the minds of the unsuspecting, like the psychopath.

Keep things quiet. Do not confront your psychopath, engage in a battle of wits, challenge or attempt an intervention with your psychopath. This will only open you up for further potential pain, suffering, and potential loss.

They psychopath has the uncanny ability to turn anything that you say against you. Don’t give them the opportunity.

Stay the course. If the psychopath has counter-attacks you, don’t respond.

If you communicate anything to this person it should only be silence. Be steadfast and unshakeable, solid as a rock.

He or she must realize that you cannot be manipulated or be bullied into making any kind of response, no matter what they do or say.

Keep a good posture, positive outlook, smile and be confident (even if you don’t feel like it) at all times.

Any indication of weakness will be seen as an opportunity either to insert themselves or launch another attack. 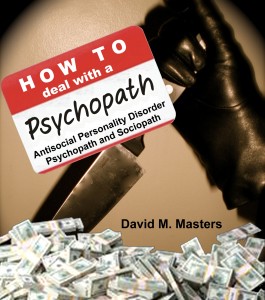 Document everything. Keep hard copies of everything you can to document any interaction or statements made by your psychopath and keep it at a secure location.

Watch what you say. Act as if every word you speak is being recorded, and may be read to a jury in the future word-for-word, twisting your words and spun out of context in an effort to make you look like a lunatic.

Maybe someday the people who once trusted you will see the truth, but even so, if your psychopath was a masterful one, they will still wonder about you, even after the true colors of the psychopath are made known.

So, don’t hold onto the false hope of one day being vilified of all the illicit accusations that were made against you. In most cases the effects are permanent, though may fade over time. Maybe, in the afterlife…

Most of all, forgive yourself. You were not the perpetrator, here, you were the victim. And as a victim, you may have found yourself invulnerable or compromising situations, and you may feel like the fool. But you were not the fool. Anyone could be victimized by the proficient psychopath and it happens every day in all walks of life and levels of society.

You could not have seen this coming… but now that you are aware, you are less likely to become a victim again… and maybe you can help others to see the signs – or at least be aware – that there are evil people out there, the virtual wolves in sheep’s clothing, who seek to destroy the lives of others without remorse.

Thank you for joining me for this message. It is my hope that this information will help to save you and other from further potential pain, suffering or loss at the hands of the psychopath. Pass this information on to others who may be potential victims.

For more information, or to contact me, visit psychopath victims dot com. 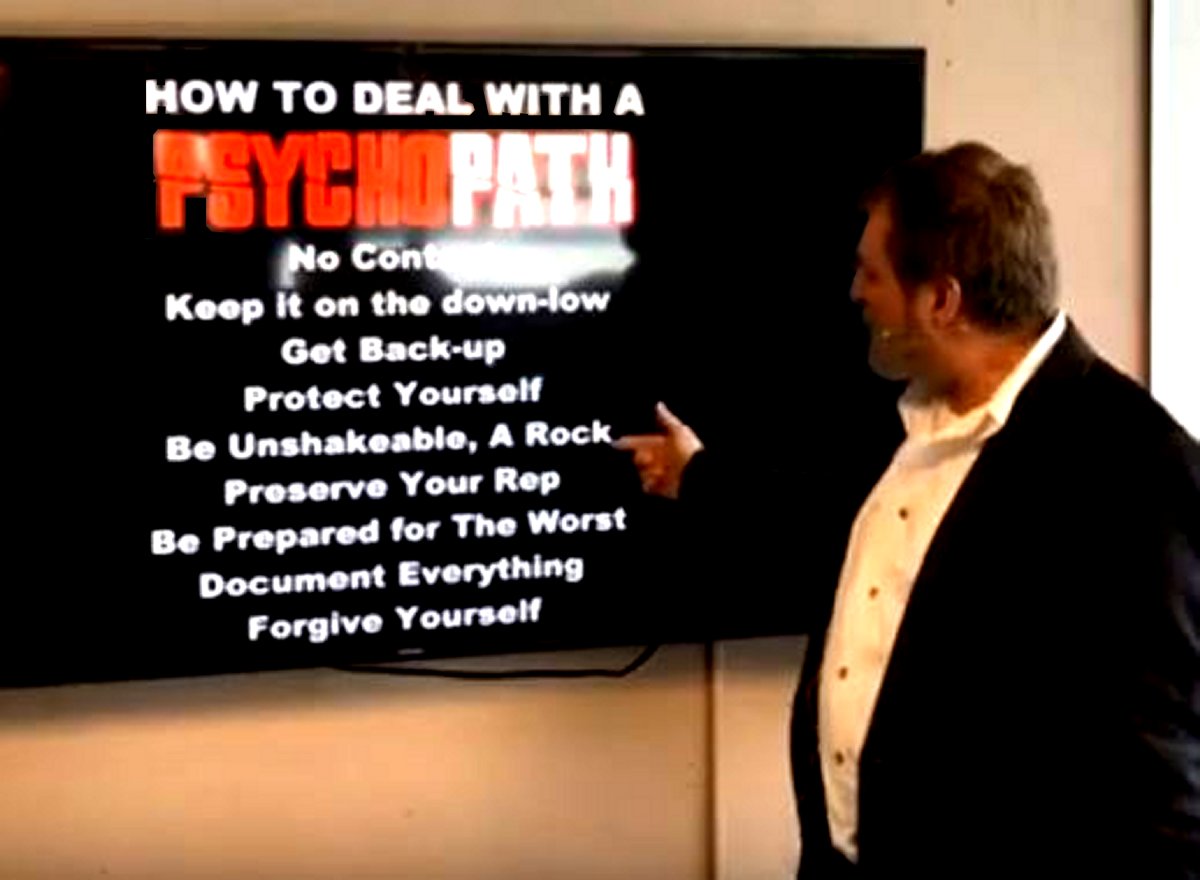 One thought on “How to Deal with a Psychopath”