If you really desire something to be ever present in our life, then give it away. 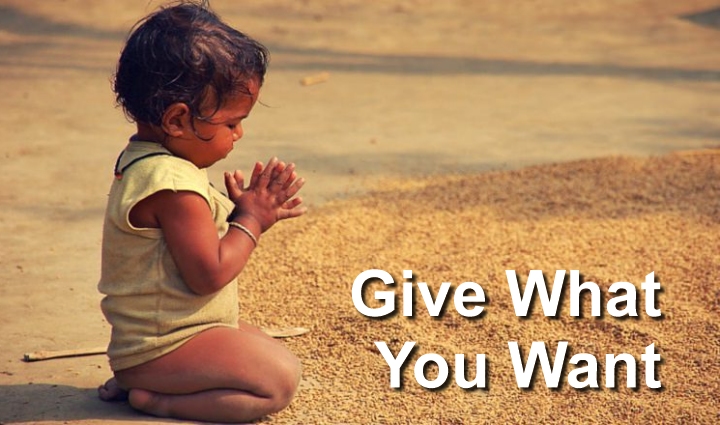 There are many ways to get stuff, as in most areas in life, obtaining physical possession or emotional states includes a wide spectrum of possibilities but basically are obtained either by hoarding or giving.

Hoarding is fear-based promoting lack, and giving is gracious benevolence that promotes abundance.

Which sounds more appealing to you?

In a fear-based state of mind, the person who is acquiring any given thing, circumstance, state of mind or feeling is doing so from an energetic position of survival, and in a more aggressive campaign for any given thing, survival of the fittest. The extreme is likened to an act of war, where the goal is to conquer the enemy to obtain that which is sought.

In the battlefield of acquisition morality may be compromised in an effort to get what you want. Not unlike war-time. We raise our children not to kill. Later in life, they may find themselves in occupations where they are taught that killing is not only acceptable in certain circumstances, but if they are in a war-time occupation it becomes their job, to kill for their country.

The same is true for fear-based accumulation. To varying degrees (based on the individual) all bets are off. They are likely to do or say anything in an effort to obtain that which they seek. The more desperately they want it, the more desperate the measures they will take to get it.

You might think that this fear-based acquisition might represent only low income individuals. If so, be prepared to wrap your head around the idea that this style of acquisition permeates all income levels from the lowest to the wealthiest people on our planet.

In the fear-based system, the acquisition of that which is sought is not satisfying to the person who obtained it in this manner. While some satisfaction is obtained by getting what they wanted, it doesn’t last long, and they long for something else to get.

I am not offering any judgment on how someone acquires the stuff they want. It’s not good or bad, right or wrong, it just is what it is.

Then there are the people who are thankful for anything they receive and give freely with no expectations and they get everything they want in an abundant fashion, while the rest of us look on in utter amazement wondering, “How do they do it?”

They don’t work hard for anything, do not obsess over its absence, just believe they will have it and whatever it is they’re wanting finds its way to them.

They tend to be extremely generous, helping others, giving of themselves in a variety of ways to offer energetic assistance, contribute to the evolution of peace and/or a better world in some way.

Whether they are aware of it or not, they are participating in what we currently refer to as the Law of Attraction. Some people just do it naturally and the rest of us can learn how to live a life like this, although it will take some effort on our part if we are to move from fear-based acquisition to gracious abundance.

Reduced to its simplest form, I see the fear-based acquisition and gracious abundance not as good and bad, but more like the hard way or the easy way. To me it is easier to freely give, love and promote peace, kindness and a better world and enjoying all the things that come my way, than to fuss and fret about not having what I want, scrimping, saving or manipulating people or circumstances (including finances and financing) to get what I want.

If you are in the fear-based mindset, the scrimping, saving, financing sounds much more practical and easier than letting go enough to find joy in allowing what you want to come to you at the perfect time. To you, the concept of giving-and-allowing sounds impractical or ridiculous at first blush.

This applies to all things, material things as well as emotional states.

In this respect it is true: you cannot buy love or happiness. Oh, you can achieve that state for a while via any means possible, but it does not satisfy as much as when that which you seek is obtained by giving of it freely, and receiving it in return.