Ever wonder if there’s some force that animates all the life around us?

Ever wonder if you have any effect on the source, or if it’s all just predetermined fate?

Have you ever asked the questions (either aloud or silently to yourself):

Where did I come from?

Why am I here?

If you have, you are not alone. There are many of us asking those questions and thanks to emerging science we are starting to get answers, though you may not be able to access the scientific facts as they come to light.

Why? – Because there are those who would like you not to know this information. There are people who are charged with managing us, the masses of the earth’s peoples that continue to grow and expand. They cannot have us knowing that there is the possibility that we are more… three-dimensional beings living simultaneously alongside other dimensions teaming with vibrant life.

It is not my lot in life to convince anyone of anything, though regularly while conducting my work with clients it is part of my function to challenge a client’s belief system; not to persuade the client in one way or the other, only to get him or her to consider there might be other possibilities that may not have been considered previously. This awakens one’s sense of wonder.

Wonder is the bane of the controllers’ quest for power.

We, as a people, are much easier to manage if we are taught by wrote, example and trained to believe, act and react in certain ways; and this training starts at birth as we are trained by parents who have been trained and shuffled into learning institutions who have been heavily programmed to deprogram your sense of wonder.

What if we were surrounded by power that was so great that it could only be imagined but even our imaginations have fallen under the power of the controllers. The mere though – let alone mention – of the idea of supernatural power elicits the pre-programmed response, “If I can’t see it, it is not true.”

Then, if someone insists that a certain unfathomable idea might have some merit, the pre-programmed response escalates into questioning one’s mental acuity and/or sanity. Certainly such a person would run the risk of being crazy, labeled a kook or insane.

If they can only keep us thinking that a thing must be seen to be believed; they retain control.

I have always wondered if there was something more… Even in my youth (I know; the pre-programmed response would try to blame my early exposure to marijuana fog or hippie communes leading to brain damage, so as to discredit any experience or factual data that I might try to deliver, nonetheless) I knew there was something so incredibly bigger than we had been told was going on.

My early foray into the ministry was my first attempt to find out more. I was full of wonder, starving for the truth and open… so very open. So open, in fact, that the ancient texts that I had access to were not enough to quench my thirst.

Why? – Because no matter how advanced or open-minded the reign of thought within any particular model, each expounded thought was placed neatly within a box – the box was secured and protected. Yes, this new revelation is the highest form and it stops here. This is our definitive truth.

Immediately, my feathers begin to ruffle, “Are you kidding me?” Surely this is a joke. Didn’t you just explain to me all the series of revelations that have been revealed to man via God or science, and how it superseded all thought up until that point of revelation?

Is it just me? – Or is the fact that you just said, “This is it!” sounding a little like the unenlightened folks that you ridicule for embracing their beliefs in the same manner?

Could there be more?

Maybe I am not normal (dear God, please don’t let them ever make me the N-word) but I have the wonder of a hundred men.

Do I believe in things unseen? 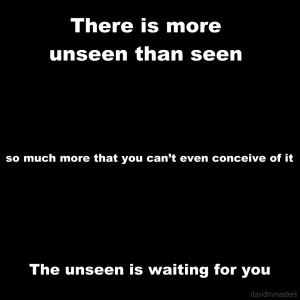 Far be it from me to say that a thing is this, or that, or limited in any way; leaving the door open… for even more…

Could it be that it’s not just me and a chosen few?

Could it be that there is a growing awakening among all the people who are readying themselves for the nest step of human evolution?

And does even the thought of such a possibility make anyone, who thinks it is their duty to prevent this evolution and to control us, shake in their boots?

There is more unseen than seen; so much more that you can’t even conceive of it.

The unseen is waiting for you.