And the crowd goes wild!

And ‘ere it goes, another division between us and them, me and you, cause for debate leading to discord, angst or worse. 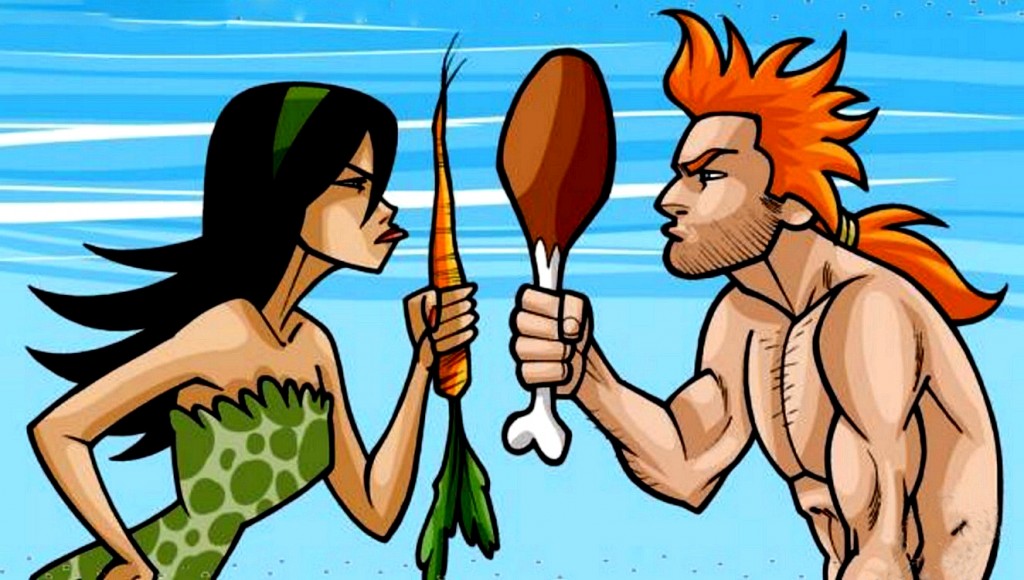 Many of my friends and relatives are vegetarians, while others are animal-killing meat-eaters and I love them all equally. Me? I’m somewhere in the middle, a sort of closet veggie. I eat vegetarian and meat (not meat and vegetables) something they refer to as semi-vegetarian (who would not kill something to eat it), which makes me a heretic in both camps.

I have observed pleasant conversations about differing views about what foods people prefer to eat turn into heated debates that render down to both opponents asserting, “I’m right; you’re wrong.”

Like we haven’t seen that before; it’s the classic right vs. wrong, good vs. evil, love vs. fear, truth vs. lies, us vs. them, ours vs. theirs, and me vs. you mechanism that keeps us separated, prohibiting our world from evolving past its current state.

I travel a lot and almost every time that I spend time in transit for two hours or more, at some point along the journey, I am absolutely amazed that I am able to get from point A to point B in such a short period of time because it was only 150 years ago, that I would have been riding a horse.

With the utmost reverence, I am awestruck by technological advancements we are blessed with. We have motorized transportation, electricity, light bulbs, mastered transmission over radio waves, audio, photographic and video recording and playback devices, movies, refrigerators, plastic, aerospace technology, lasers, footprints on the moon, satellites, robots, and exploration in outer space.

It’s easy to take for granted the modern convenience of television, computers and cell phones as they are now a part of our everyday life; yet all this, within less than three generations?

Since the earliest inkling of our beginnings, people argued, fought and killed each other and only he who possessed the best skills – or luck – survived.

It has been less than 5,000 years ago, when we started killing by declaring war between peoples. It wasn’t enough for two people to duke it out between themselves; “I am the leader and I will enlist my people to battle on my behalf.” With all our advancements, we still are running these 5,000-year-old programs?

I am surprised that we still let leaders (those who control wide-reaching collectives of thought) to manipulate us into dissention, leading to mass conflict.

I love being born into a system that is represented by a constitution that was crafted by rebels attempting to create a Utopian society. I find it interesting that also, in the last most forward-thinking and technologically advanced 150 years, we’ve seen our government slipping backwards. Tightening their controlling grip on Americans, requiring them to purchase licenses to get married, drive a vehicle, build or renovate your home, be remunerated for providing trade services, selling something or even hunting and fishing.

And for god’s sake, don’t have a rain barrel to collect water!

A psychopath told me, “It’s your First Amendment right to lie and deceive.” While I disagree with his interpretation of, “Free Speech,” I love the idea that anyone can think or say, what they want (as long as it doesn’t hurt anyone else). Yes, I realize that my parenthetical inclusion is what creates a conundrum with the concept at hand.

Oh, yeah, back to vegetarians vs. carnivores.

It comes down to this: Do you have the right to be a vegetarian? Answer: Yes.

Then celebrate your right and eat all the veggies you want. Hooray! And I will celebrate with you; Wa-hoo!

Same goes for the meat-eaters.

I know, I can already hear my favorite PETA maven interrupting with, “What about the rights of the animals who are killed for their meat?” And she has a point.

Maybe our society is moving toward a meatless diet; I don’t know. But I do know that we are not there, yet.

In the meantime, people are allowed to eat meat, and some of them do so vigorously.

I would say this to both the vegetarians and the carnivores:

Arguing and fighting for your cause has never in the history of our civilization converted anyone.

Celebrating your passion for something you do and exemplifying the happiness you feel by participating in what you feel passionate about will make others want to know what you are doing. And they might inquire about it; even want to try it for themselves.

This is not politics or religion (which should consider a similar approach).

Love, let love, share your love and let people find their own way.

Find your happiness and let it be.