I’ve spent most of my life in the personal and professional growth industry, surrounding myself with clients and mentors who are striving to be on the leading edge or have a burning desire to help make the world a better place. I have been blessed to work with some of the best minds in the mind sciences. 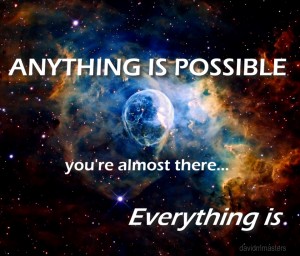 One common theme that runs throughout the waves of thought that permeate the sea of higher consciousness, is the belief that, “anything is possible.”

Under normal circumstances, people are programmed to doubt their own sense of value – even though they came to this planet with a unique set of skills, abilities and unique message to share with the local community or the world – feeling as though they were not qualified to be a worthy messenger.

Usually, when I begin working with someone they are already on the path of achieving their highest and best or at the very least they have knowingness that their life is beckoning them to a higher calling and sense of fulfilled purpose.

Personal performance coaches start with the tenant of getting the client to a baseline understanding that there is ample well-documented, verifiable proof of things once thought to be impossible became possible starting with the thought that anything is possible.

This is not a new concept, as even New Testament’s Jesus proclaims that all things are possible for he who believes (Mark 9:23) and many have gone on since to spread these words with different themes attached to it for clarity in certain situations, such as:

“If you believe in yourself anything is possible” or “Impossible only means that you haven’t found the solution yet.” A scientist-and-engineer friend of mine (referring to a quote by Henry Ford) says, “Anything is possible, with enough time and money.”

Celebrities have chimed in with their varied view about anything being possible:

Even when Alice in Wonderland says, “This is impossible.” The Mad Hatter counters with, “Only if you believe it is.”

All this to say, anything that has ever been conceived, discovered or achieved was birthed in the thought that anything (currently believed to be impossible) is indeed possible – and someone believed it with enough fortitude – and had undertaken the task of making it so.

Napoleon Hill said, “Whatever the mind can conceive and believe, it can achieve.”

We believe that anyone – yes, even you – have everything that you need to bring this thing to pass; and for some of us, it is our mission in life to support the efforts of an inspired individual to achieve the impossible.

Believing that anything is possible is only the beginning. Yes, it can get you from here to there and beyond.

There is a superior concept that lies ahead in the horizon, that once it is truly grasped, changes everything and the belief that all things are possible begins to fade as one begins to understand:

I’ll let you ponder that one…

Anything is Possible (you’re almost there)… Everything Is