I’m a communicator; it’s what I do.

How can something so simple, like stacking words in a certain order to convey one’s thoughts, be so complicated?

I can assemble a little 140-character text (laughing and giggling about how innovative, clever and humorous I’ve been in my word assembly) and press SEND.

Within moments, I receive a barrage of complaints, accusations and abbreviations, like OMG, WTF and/or blocked, unfriended, deleted or reported as spam.

Now, I feel bad because SHE reared her pretty head and stuck that cute little nose right in the middle of my attempt to reach out and communicate with others.

With a name like, “Interpretation,” you’d think she’d exert all her efforts in helping people understand what message I was trying to convey… BUT NO-o-o-o, she’s got to stretch, twist and garble it all so as to have the worst possible outcome. 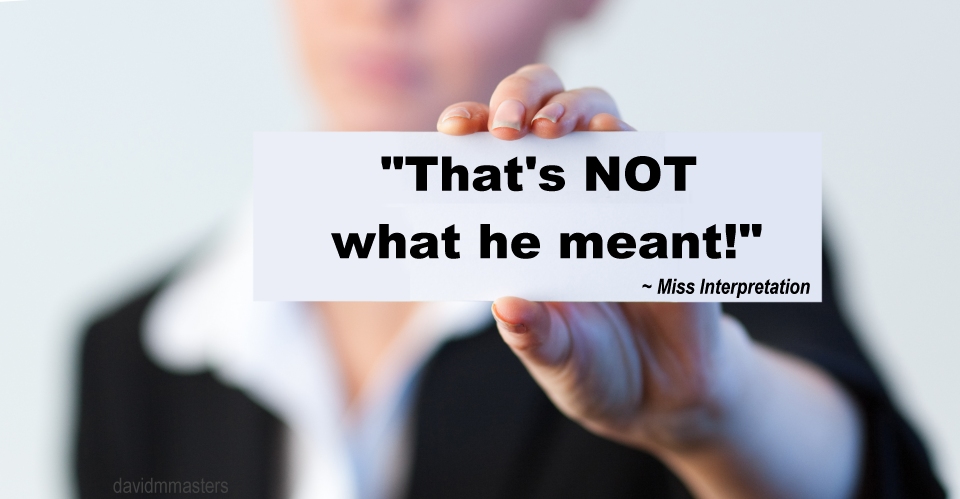 Little Miss Interpretation has been at this as long as I can remember. As a kid, I’d try to express myself to my parents and get sent to my room or punched in the face. I’ve said things (and been fairly adequately quoted) from the pulpit, stage, conference room, boardroom, classroom or office with the best intentions, only to have MI mess things up for me.

There I was, fully intent on effectively communicating when she walks in and gets everyone all riled up, offended, objecting and ranting about something that wasn’t even intended to be included in what I was talking about. How does she do it?

“That’s not what he meant to say.”

She gets inside people’s head and rifles through all their personal belongings and grabs words, ideas and thoughts that still hold emotional charge from the past and waves it in front of their face:

“See this! Look at that! Remember this? What about that?”

A relentless barrage of old information that is highly charged with negative emotion, causing the individual to think that danger may be ahead.

A person can’t help but recoil in self-preservation and protect themselves from such a vicious attack, and…

Forget everything I’ve ever said before this moment.

Now, all attention is on this word – or phrase – that harkens to a time that may have been dangerous (or at the very least unpleasant) and now I (the messenger who used the word or phrase with the best of intentions) am an assailant.

How does she wield so much power over us? And I’m the first to admit, that even though I work hard on kicking her to the curb every time she tries to interrupt someone else’s monologue, I too, have fallen victim to her manipulative influence and subject to mounting up to do battle or cut-and-run.

She does seem to have access to all my personal baggage accumulated since birth, and she’ll use anything she can get her hands on to derail (initiating fight or flight response) an otherwise potentially meaningful exchange of information between two people.

Why does she do it?

I don’t know… I think it’s because she hangs out with that little child inside us and that’s how she gets her kicks. Or maybe her intentions are good; it’s just that in an effort to protect us from harm’s way, she sees everything as a potential threat… even when it may not be a threat at all.

Looking for a home

in our hearts and minds